What Would Alexander Do? 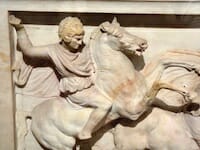 The Greek government nowadays is desperately broke. One answer to its troubles is to borrow money, while the other is to declare bankruptcy and start all over. Either possibility is imposing a strain on the world’s financial system, because if Greece falls, it might take the European banks that lent it money along with it.

But bad as that would be, it wouldn’t match the results of the most important case of “sovereign debt” – to use the current euphemism for a government out of money – in Greece’s history. That took place over 2000 years ago, in 336 B.C.

In order to prepare his army for an invasion of the Persian Empire, King Philip II of Macedon bankrupted his kingdom. When Philip was murdered that year and replaced by his son, Alexander, the twenty-year-old new king was faced with a choice. Either he could continue his father’s invasion plans or he could go begging.

Alexander chose war, of course, and went on to victory and immortality.

Everyone knows that he became Alexander the Great because he conquered the Persian Empire. But he succeeded not only on the battlefield but also in the banks. Everywhere he went, Alexander raised money for his forces. He had to, because armies and navies weren’t cheap – then as now. Eventually he took possession of the Persian treasury, which made him the richest man on earth. Not bad for a king who started out broke.

There’s a lesson here – and it’s not that Greece should fight its way out of bankruptcy by starting a war. Heaven forbid. The point, rather, is that every crisis is also an opportunity. The Greek people believe that they should not have to suffer a generation of austerity in order to restore the world’s banks to solvency. And they are right.

The Greeks should use their justifiable outrage and leverage a major change in the Euro. Break it up into two currencies, one for the stronger economies of northern Europe, and another for the southern European economies that would blossom with a devalued currency. That might hurt the pride of certain European elites but it would ease the pain of millions of people.

In short, if Alexander were alive today, he would turn Greece’s financial crisis into a bold instrument of radical change, just as he did long ago.