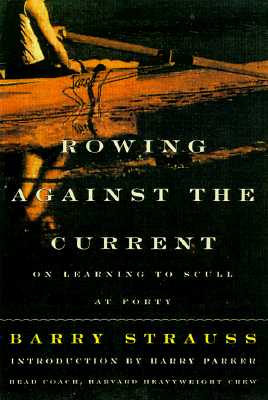 Praise for Rowing Against the Current

Rowing is a sport and a passion. Before modern times, it was also a profession and an arm of war at sea, as well as, in certain circumstances, a punishment reserved for prisoners. Pain, work, and leisure are odd companions, but paradox is at the heart of an activity whose practitioners face backwards.

Take, for example, a single scull, the boat I own and love to row. It is a thing of beauty and also slippery and frustrating and as outdated as a spinning jenny in a micromechatronics facility. Yet there is nothing to compare with the grace and power of a perfect stroke alone in a slender scull in still water at sunrise.
Whether you are drawn by the quest for fitness, or a taste for repetitive motion, or the competitive drive, or an impossible urge for perfection, or just by the desire to try something new, one day you may find yourself in a rowing boat. And then you will be part of an ancient tradition.

Rowing is as old as the pyramids. The Egyptians held regattas on the Nile and celebrated rowers in wall paintings and carved reliefs. In ancient Greece rowing was less a sport than a way of war. There was no rowing at the ancient Olympics nor at most other Greek games, whose gentleman-athletes looked down on rowers as plebeians. But Greek naval commanders organized regattas to keep crews in fighting-trim. Alexander the Great, for instance, organized a naval regatta on the Tigris River at Babylon. The Romans enjoyed boat races and also mock naval battles. The emperor Augustus established an annual regatta to celebrate his victory at sea over Antony and Cleopatra at the battle of Actium in 31 B.C.

The modern sport of rowing began with races among London ferrymen in the eighteenth century, a practice which spread to the coastal cities of British North America. In the nineteenth century, Oxford and Cambridge made rowing an elite sport, and in the United States, Harvard and Yale followed suit. The late 1800s also saw a period of professional sculling, with a champion circuit in Europe, North America, and Australia. But cheating scandals and competition from new spectator sports eclipsed professional sculling, which all but disappeared in the early twentieth century. Amateur rowing, however, has flourished, at schools, universities, clubs, national teams and, since 1900, as an Olympic sport.

“Sometimes a book takes you by surprise…Rowing Against the Current is written with such a wonderfully physical sense of this ancient sport. This is a story about remaking oneself in middle age; as such it overwhelmed me, as it will a large raft of readers. Bravo to Barry Strauss.” Jay Parini, author of Benjamin’s Crossing

“Strauss’s dogged pursuit of an ancient craft shows us how exhilarating — and occasionally terrifying — rowing, past and present, can be.” Victor Davis Hanson, author of The End of Sparta: A Novel

Purchase this book from Simon & Schuster

Barry StraussRowing Against the Current03.19.2012
“No one presents the military history of the ancient world with greater insight and panache than Strauss….” - Publishers Weekly
Purchase Online
Amazon