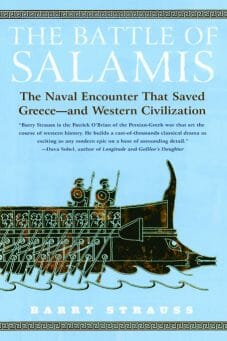 About The Battle of Salamis

On a late September day in 480 B.C., Greek warships faced an invading Persian armada in the narrow Salamis Straits in the most important naval battle of the ancient world. Overwhelmingly outnumbered by the enemy, the Greeks triumphed through a combination of strategy and deception.

More than two millennia after it occurred, the clash between the Greeks and Persians at Salamis remains one of the most tactically brilliant battles ever fought. The Greek victory changed the course of western history -- halting the advance of the Persian Empire and setting the stage for the Golden Age of Athens.

In this dramatic new narrative account, historian and classicist Barry Strauss brings this landmark battle to life. He introduces us to the unforgettable characters whose decisions altered history: Themistocles, Athens' great leader (and admiral of its fleet), who devised the ingenious strategy that effectively destroyed the Persian navy in one day; Xerxes, the Persian king who fought bravely but who ultimately did not understand the sea; Aeschylus, the playwright who served in the battle and later wrote about it; and Artemisia, the only woman commander known from antiquity, who turned defeat into personal triumph.

Filled with the sights, sounds, and scent of battle, The Battle of Salamis is a stirring work of history.

Let it be said straight way that this is a superb example of the use of scholarship to underpin a fine piece of narrative writing.
Frank McLynn, Literary Review

Barry Strauss is one of the best ancient naval historians alive, and in The Battle of Salamis he combines his classical expertise with his natural gifts as a storyteller to make the inexplicable Greek victory not just explicable — but captivating as well. The ensuing drama is as riveting as it is historically accurate.
Victor Davis Hanson, Senior Fellow, the Hoover Institute and author of Carnage and Culture: Landmark Battles in the Rise of Western Power

Barry Strauss is the Patrick O’Brian of the Persian-Greek war that set the course of western history. He builds a cast-of-thousands classical drama as exciting as any modern epic on a base of astounding detail.
Dava Sobel, author of Longitude and Galileo’s Daughter

Led by a shrewd and bold commander, the sailors of the world’s first democracy — badly outnumbered, their capital destroyed — drew strength from their freedom and crushed the forces of the massive Persian Empire to save the dawning of Western Civilization. Superbly told, and as dramatic as history gets.
R. James Woolsey, Vice President, Booz Allen Hamilton, and former Director of Central Intelligence

A ripping yarn of a world at the brink of annihilation and of the heroes (and fools) who brought it back from the edge. Strauss’s deep scholarship and clear prose bring the men and the era alive. We can see the ships and smell the action, but more importantly, we understand what it meant — for the Greeks then and for all of us now. This is the indispensable work on Salamis.
Steven Pressfield, author of Gates of Fire: An Epic Novel of the Battle of Thermopylae

This is a superb volume by a dazzlingly brilliant historian at the height of his powers.
Frank McLynn, Literary Review

In the hands of Cornell University historian Barry Strauss, the story of the battle is a military epic of the first order.
Michael Kenney, The Boston Globe

This account of [the Battle of Salamis] by a history professor who is an expert on naval warfare with a gift for vivid narrative brings it, in all is suspense, its complications, its surprises and its cast of extraordinary characters, to fervent and turbulent life.
Bernard Knox, The Washington Post Book World