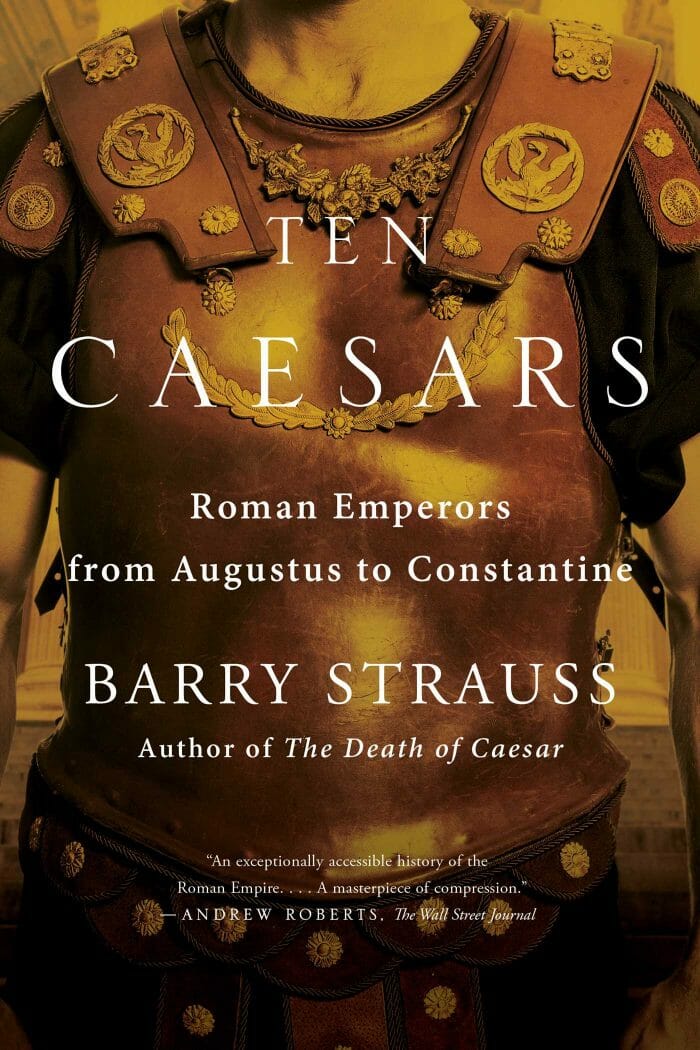 Bestselling classical historian Barry Strauss tells the story of three and a half centuries of the Roman Empire through the lives of ten of the most important emperors.

Ten Caesars is the story of the Roman Empire from rise to reinvention, from Augustus, who founded the empire, to Constantine, who made it Christian and moved the capital east to Constantinople.

During these centuries Rome gained in splendor and territory, then lost both. The empire reached from modern-day Britain to Iraq, and gradually emperors came not from the old families of the first century but from men born in the provinces, some of whom had never even seen Rome. By the fourth century, the time of Constantine, the Roman Empire had changed so dramatically in geography, ethnicity, religion, and culture that it would have been virtually unrecognizable to Augustus.

In the imperial era Roman women—mothers, wives, mistresses—had substantial influence over the emperors, and Strauss also profiles the most important among them, from Livia, Augustus’s wife, to Helena, Constantine’s mother. But even women in the imperial family faced limits and the emperors often forced them to marry or divorce for purely political reasons.

Rome’s legacy remains today in so many ways, from language, law, and architecture to the seat of the Roman Catholic Church. Strauss examines this enduring heritage through the lives of the men who shaped it: Augustus, Tiberius, Nero, Vespasian, Trajan, Hadrian, Marcus Aurelius, Septimius Severus, Diocletian and Constantine. Over the ages, they learned to maintain the family business—the government of an empire—by adapting when necessary and always persevering no matter the cost. Ten Caesars is essential history as well as fascinating biography.

The grandeur and the decadence, the cunning and the brutality, the surprising prominence of imperial women in a man’s world, and the practical wisdom that allowed Rome to maintain its rule over millions for centuries before finally losing its grip in the West: it’s all there in one book.

Strauss’s snappily written narrative, focused on Roman emperors from Augustus to Constantine, opens with an evocative description of the ruins of the Palatine Hill in Rome by moonlight. He goes on to conjure up brilliantly the soundscape of Roman military life and the visual impact of the empire’s proliferating urban centres.
Catherine Edwards, The Times Literary Supplement

An exceptionally accessible history of the Roman Empire. . . . Much of TEN CAESARS reads like a script for Game of Thrones. . . .This superb summation of four centuries of Roman history, a masterpiece of compression, confirms Barry Strauss as the foremost academic classicist writing for the general reader today.
Andrew Roberts, The Wall Street Journal

To cover 360-odd years in a similar number of pages means going at quite a lick. . . .The strength of this approach is that it offers perspective. All too often books on Rome, like literary grand tourists, revisit the familiar sites, lingering over the naughty Neros, the effective armies and the efficient bureaucracy. But, as Strauss shows, Rome was far more complex and far more interesting than that. . . . Enlightening.
Catherine Nixey, The New York Times Book Review

The term ‘good read’ is too often, even promiscuously, applied to new books. But the Ten Caesars is more than worthy of the term. Both classics scholars and armchair historians will find it rewarding. It is, truly, a good read.
Chris Timmers, Washington Examiner

Strauss has mastered a vivid narrative line, a practiced skill at demystifying the past… Readers will learn a lot from his book and the fables will make the lessons a bit sweeter along the way.
Steve Donoghue, Christian Science Monitor

Stepping into the shoes of a god isn’t easy, as historian Barry Strauss makes dramatically clear in a new book that traces the biographies of 10 of the men who succeeded Julius Caesar, deified by the Roman Senate. But megalomania may have been an asset as well as the defining characteristic of Rome’s emperors,
Linda Glaser, Cornell Chronicle

Traveling to Europe on Spring Break? “Get some insight into that ruin you’re looking at with Strauss’s history page-turner, which brings to life Rome’s rulers.
Amy Alipio, National Geographic

Ten Caesars, subtitled Roman Emperors from Augustus to Constantine, gives to its reader a good idea of just how horrid the classical world was even at its best. … Strauss’s book often reads more like an account of battles for control of a mafia than a work about the politics of a viable state.
James Barasel, Catholic Herald

Ten Caesars is an excellent and eminently readable introduction to this era, but it will also reward those who already have an interest in Roman history by making them think again about the characters of these rulers and the men and women around them.
Adrian Goldsworthy, The New Criterion