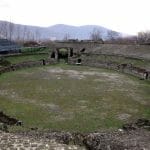 Tough times evoke dreams of superheroes, even flawed ones like the characters in the new film “Watchmen.” Is the stock market down? Call for Dr. Wall Street. Is unemployment booming? Jobade to the rescue. Is there an insurgency to counter? Here comes Afghanisuperstan. Who, finally, should brood over the whole scene if not Punditocrat?

To the slaves of Roman Italy two thousand years ago, Spartacus too might have seemed like a superhero. He was, a contemporary source says, outstandingly strong and courageous. He practically worked alchemy by taking a group of malcontents armed with only kitchen knives and skewers and turning them into an army.

But then, Spartacus claimed divine support. Dionysus himself, god of wine and liberation, backed the rebel. It was said that when Spartacus had first been sold into slavery in Rome, a snake had wrapped itself around his sleeping head. This was interpreted as a miracle and a sign of divine approval.

To the many Italian slaves who worshipped Dionysus, Spartacus might have seemed like a superman. Roman slave owners, for their part, might have considered Spartacus an experiment gone awry. The former allied soldier and gladiator had turned on the fans and the Republic that had supported him – or so they saw it.

Spartacus sought freedom but his followers murdered innocent civilians and looted Roman farms. When Spartacus tried to rein them in, they ignored him.

“Quis custodiet ipsos custodes?” That is Latin for “who will guard the guards themselves?” – indirect source of the film’s slogan, “Who will watch the watchmen?” But who are the guards and whom are they guarding? In ancient times, as today, it is not always easy to separate the good guys from the bad.