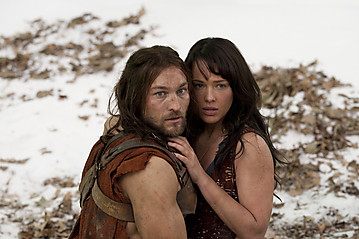 As the Starz drama “Spartacus: War of the Damned” hurtles towards its conclusion, Speakeasy asked historian Barry Strauss to reflect on some of the important but little-known aspects of the true story of Spartacus. The penultimate episode of “Spartacus,” titled “The Dead and the Dying,” airs tonight.

That a gladiator like Spartacus should have a wife to help his rebellion catch fire seems like a Hollywood touch but, in fact, it’s true. She was a Thracian like him, from the same tribe. Neither her name nor the name of their tribe survives. Only one ancient source mentions her existence, but he is Plutarch, who relied on the (now largely missing) contemporary account by Sallust. In his “Life of Crassus,” Plutarch writes:

It is said that when he [Spartacus] was first brought to Rome to be sold, a serpent was seen coiled about his face as he slept, and his wife, who was of the same tribe as Spartacus, a prophetess, and subject to visitations of the Dionysiac frenzy, declared it the sign of a great and formidable power which would attend him to a fortunate issue. This woman shared in his escape and was then living with him. (Plutarch, Crassus 9.3)[1]

If it seems odd that a gladiator had a wife, it shouldn’t. Roman slaves often had wives, and children too, although such marriages were not valid in Roman law.

Spartacus’s wife was religious, vocal, and hardy enough to endure the life of an escaped slave battling the Roman army. As a Thracian woman she probably had tattooed arms. As a worshipper of Dionysus, she was used to rural places, especially mountainsides. Another thing about the cult of Dionysus: She probably handled snakes, the god’s symbol.

Dionysus was the god not only of wine but also of liberation. Various peoples considered him their national god, from Thracians to Greeks in southern Italy. Several enemies of Rome chose Dionysus as their rallying cry, including rebel slaves in second-century B.C. Sicily and the Anatolian King Mithradates of Pontus, whose long war against Rome was still on at the outbreak of Spartacus’s revolt in 73 B.C. Hence, Dionysus made a good symbol for Spartacus.

Thracians valued the religious authority of women and they set great store by prophecy, making it likely that Spartacus’s wife was a respected figure. Slave owners may well have feared her, having learned from the Sicilian rebellions that prophets and witches were troublemakers.

As for the story of a snake coiled around Spartacus’s face, herpetologists discount the possibility, but that may be why it seemed like a miracle at the time. Imagine Spartacus’s wife announcing, perhaps after a vision in a trance that Dionysus had sent a snake as a sign of Spartacus’s great power. Did she actually inspire Spartacus’s revolt? To say that would be going beyond the evidence, but she certainly added to his mystique. In short, behind the macho figure of Spartacus there was a woman.

We do not know what happened to the Thracian woman but she probably shared the same unhappy fate as most of Spartacus’s followers.

Barry Strauss is Professor of History and Classics at Cornell and author of  “The Spartacus War” (2009).

Image  above: Starz Andy Whitfield as Spartacus and Erin Cummings as his wife Sura in the Starz series “Spartacus.”