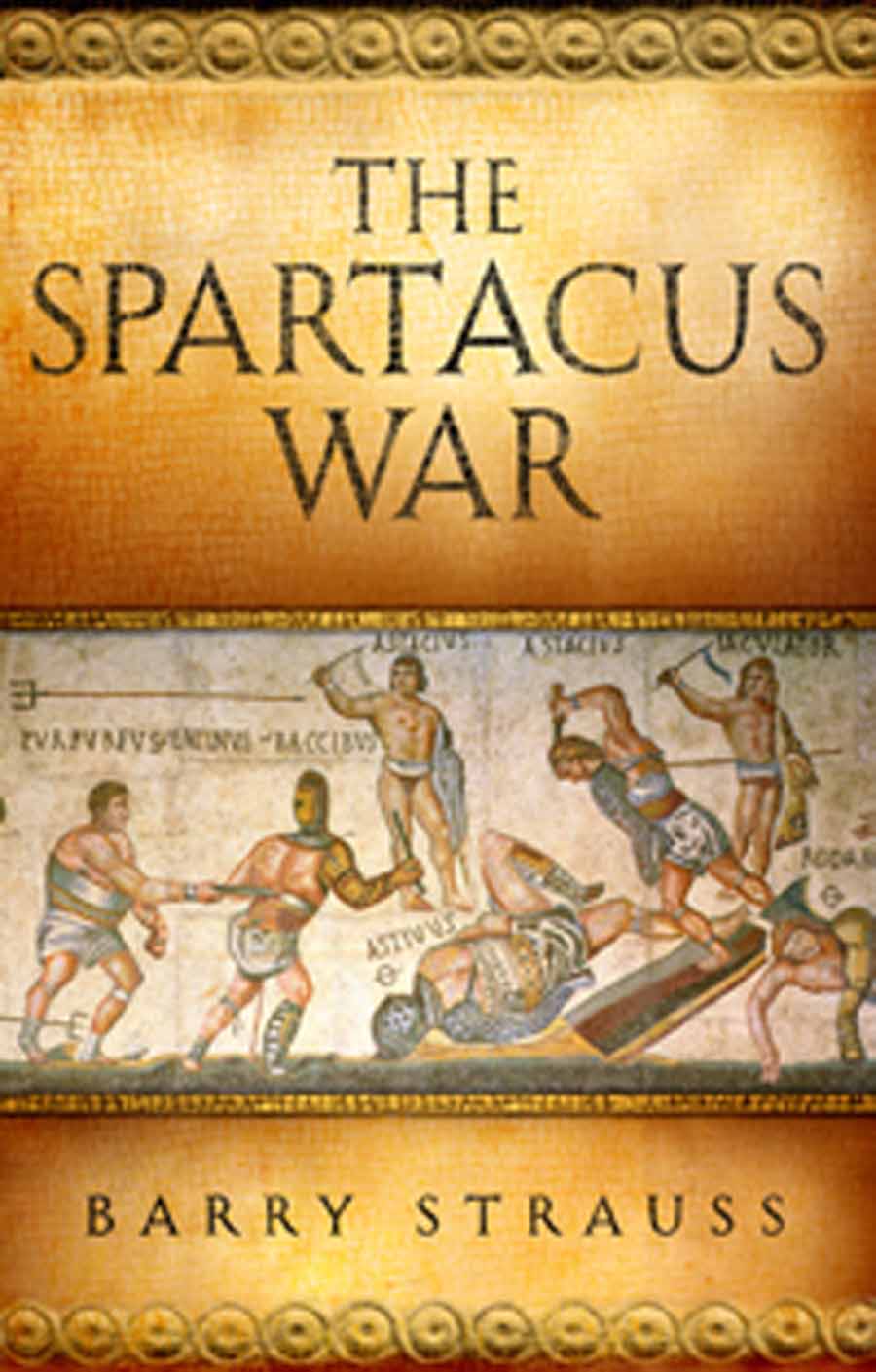 The Spartacus War by Barry Strauss

Spartacus’s was the most famous slave revolt in history and, writes Barry Strauss, arguably its largest. Spartacus defeated Roman armies, terrified the political and military elites of his time, inspired revolutionaries across the ages and, finally, captured the imagination of Hollywood. Even Ronald Reagan cited him as an example of sacrifice and the struggle for freedom.

So who was this amazing man? How was his revolt possible and why were the rebels so successful for so long? Just how could the world’s only superpower allow such a situation to persist in its own backyard and why did Spartacus eventually face defeat?

“Spartacus came from Thrace (roughly, Bulgaria), an area known to Romans for its fierce fighters and ecstatic religion, and for its alternation between alliance and rebellion. As a one-timed allied soldier in Rome’s service, Spartacus should have been a Roman success story. Instead, he had become the enemy within.”

The Spartacus War then is also a story about identity politics. Perhaps once an aristocrat in his homeland, Spartacus had almost certainly been a Roman soldier. He was not only more Roman than he cared to admit but, as Strauss so elegantly puts it, Spartacus terrified the Romans not just because he was foreign but because he was familiar.

Above all, however, Spartacus was a leader. A prison breakout by 74 men armed only with meat cleavers and skewers turned into a revolt by more than 60,000. Strauss puts the numbers in context: with around one million slaves in Italy, the rebels amounted at about four percent of the slave population. In the 19th century, the US had about four million slaves and yet, says Strauss, Nat Turner’s rebellion in 1831 involved only 200 of them. Clearly, Spartacus could inspire as well as fight.

The ancient sources, which Strauss plunders so diligently, describe Spartacus as a man of passion, thirsting for freedom and burning for revenge. But, as the author explains, “Spartacus’s actions tell a different story. He was no hothead but a man of controlled emotions. Spartacus was a politician trying to hold together a coalition that was constantly slipping out of control. Whether by nature or training he was showman. His greatest prop was his own body but Spartacus used many symbols … to form his image. A cult of personality helped attract tens of thousands of followers but at a price of luring them into the delusion of invincibility.”

Because so little is known about what Spartacus said – he left no written testimony – Strauss admits that answers to questions about the man and his cause must be based on actions rather than words. And whilst those actions speak volumes, the necessity of writing history from ancient sources involves large elements of speculation. If The Washington Post found him occasionally guilty of ‘floating free of scholarly moorings’, then that esteemed newspaper also admitted that Strauss the historian has all the skills of a thriller writer, “although with none of the poetic license.”

“We do not know if Spartacus wanted to abolish slavery but, if so, he aimed low. He and his men freed only gladiators, farmers and shepherds. They avoided urban slaves, a softer and more elite group than rural workers. They rallied slaves to the cry not only of freedom but also to the themes of nationalism, religion, revenge and loot.”

The gladiators were a multi-ethnic bunch: Thracians, Celts, Germans and Italians. And this was deliberate: the Romans mixed the nationalities as a deterrent to solidarity. “They recognised,” writes Strauss “the deadly seriousness of a business that armed slaves.”

Unfortunately for Spartacus, the multitude of ethnicities and rivalries within his army meant that competing goals made any unified strategy nigh on impossible. After thrashing the Romans in a series of battles and with the opportunity to escape across the Alps, Spartacus’s men instead turned back south. Crossing the Alps did not mean returning home for many of his men and many others preferred Italy and the possibility of endless fighting and looting.

Betrayed by pirates and thwarted from crossing the Strait of Messina, his forces split into two and divided amongst themselves, Spartacus was eventually defeated by the brutal Roman General Crassus, a man made famous for celebrating his victory by crucifying 6000 rebels.

Ultimately, Strauss argues, Spartacus was defeated not so much by superior Roman troops or tactics but because of the paradox which lay at the heart of his enterprise. His men fought for their freedom and not to be told what to do by a leader, they were mainly gladiators trained to kill each other and the common language which they barely shared, Latin, was that of their enemy. Most of them felt closer ties to their family than their comrades and no-one knew if they would obey Spartacus’s orders. In the final analysis, Strauss says, freedom built his army and freedom played a major part in its destruction.

“The story of Spartacus is, first of all, a war story: a classic case study of an insurgency, led by a genius at guerrilla tactics, and of a counter-insurgency, led by a conventional power that slowly and painfully learned how to beat the enemy at its own game. The Spartacus War is also a tale of ethnic conflict. Spartacus was Thracian but many of his men were Celts; they were proud, independent and fighting-mad. Tribal divisions turned the rebels into feuding cliques who ignored their chief. The march for freedom degenerated into gang warfare and, as so often in history, the revolution failed.”

The Spartacus War is a thrilling account of ancient history given more than a touch of resonance for our modern world by this wonderful professor of Classics at Cornell University. His earlier works – The Trojan War and The Battle of Salamis – earned Strauss universal acclaim for his insight and erudition. The Spartacus War should seal his reputation for writing what has best been described as “adrenaline-pumping” history. The book is easily accessible, absolutely fascinating and one hell of a read.

THE SPARTACUS WAR by Barry Strauss

Rob Minshull produces Weekends and is an avid reader

Barry Strauss“The Spartacus War is a thrilling account of ancient history… by this wonderful professor”03.16.2014