Some Roads Lead to Rome 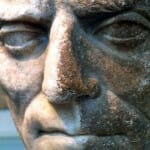 Kathleen Parker complains like Cicero, about the times and the mores. Today’s politicians, she says, are constrained “to say as little of substance as possible and to say it often.” The citizenry has become a distracted mob, unable to focus long on anything, and so deluded that they will even cheer the loss of their freedom. It’s all, Ms. Parker says, reminiscent of the Roman Empire.

She has a point, don’t you think, Caesar?

By no means. The story is a caricature both of Rome and of America.  Her characters are what she calls the mob and corrupt politicians. The trouble with Ms. Parker’s story is that it leaves out leadership. She makes no room for greatness. You would never know from her account that Imperial Rome gave rise to emperors like Augustus or Marcus Aurelius, to Claudius or Trajan, to Diocletian or Constantine. And what of generals and governors like Agrippa or Agricola or Cerialis? Ms. Parker’s cartoon omits the men who made and maintained the majesty of the Roman peace.

I notice that you say nothing about freedom. Freedom died with Cato, when he committed suicide rather than surrender to Caesar!

Cato died well, all right. Otherwise, he was far from being of service to the commonwealth. Cato’s definition of freedom was the right of three hundred old men to run the lives of 50 million people, without a scintilla of concern for the misery those millions suffered. Caesar thought differently. He took away the freedom of the Roman Senate to abuse the abuse an empire without giving its inhabitants a chance. Peace, bread, and dignity for everyone. That is true freedom, and that’s what Caesar offered in place of Cato’s oligarchy. It was very much beloved by the people.

Bread and circuses, Caesar – that’s all it was!

And what of America, Caesar? Surely Parker is right. Our presidential election is a sorry distraction!

But what about the mud-slinging and ad hominem attacks? Surely Parker is right that our politics has too much of that?

Every battle begins with skirmishers tossing barbs. It’s not even Labor Day yet. And there will be many skirmishers because the more distinguished a man is, the more followers he has.

The sleazy attack ads will continue all the way to Election Day.

You need to get out more, professor. We live in the real world of mud and blood, not Plato’s republic.  On the long march to November, the candidates will give interviews and issue position papers. There will be party platforms and public forums. And then that fine weapon of warfare – the debates.

Barry Strauss is professor of history at Cornell and author of Masters of Command: Alexander, Hannibal, and Caesar and the Genius of Leadership (Simon & Schuster, 2012).