The Classical Roots of The Hunger Games 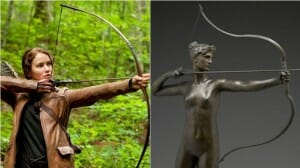 The latest installment in “The Hunger Games” film franchise opens on Nov. 21 and promises to be another blockbuster. What accounts for the movies’ success? The obvious answer, of course, is the combination of the irresistible Jennifer Lawrence and Hollywood special effects with a rollicking good story.

But we shouldn’t ignore the deeper themes of the tale, which are not only classic but classical, reaching back to Greece and Rome and the very foundations of Western culture.

At the heart of the story are three beautiful, heroic young people: Katniss Everdeen and her male romantic interests, Peeta Mellark and Gale Hawthorne. They form a love triangle, but they also represent, from the point of view of the ancients, an aroused citizenry banding together and fighting for freedom against an evil empire.

Katniss, played by Ms. Lawrence, is “an updated Theseus,” according to the books’ author, Suzanne Collins. In Greek myth, Theseus and other young people from Athens were sent as tribute—human sacrificial offerings—to King Minos in Crete. The king turned them over to the Minotaur, a murderous beast who was half-man and half-bull and lived in a maze or labyrinth. The intrepid Theseus killed the Minotaur and saved his countrymen.

Like that ancient Greek hero, Katniss defies an oppressive empire and sparks a revolution. But it’s an update with a twist. Today’s Theseus is female, which calls to mind not only modern girl power but also ancient lore. Her character is inspired by the famous Amazon warriors and Atalanta, the great female runner of Greek myth. Katniss also recalls Artemis, goddess of the hunt—Diana to the Romans—because her preferred weapon is the bow and arrow.

Like imperial Rome, the country of “The Hunger Games” is a once-free society now dominated by a corrupt and rapacious capital city. A president exercises, in effect, the power of an emperor. He lives in a grand city called the Capitol, and his government feeds off its provinces, much as ancient Rome did. The people of the Capitol radiate a baroque and overripe luxuriousness, like the lords and ladies of imperial Rome, while the provincials are poor and virtuous.

This pattern goes back to the great Roman historian Tacitus (ca. 56-117), who drew a contrast between the primitive but free Germans and Britons and the decadent Romans who had lost their republican virtue under the Caesars. Tacitus would have understood why the bad guys in Ms. Collins’s Capitol have Latinate first names such as Coriolanus Snow, the coldhearted president, and Caesar Flickerman, the smarmy host of the televised version of the games. Meanwhile, the rebels from the provinces have names that evoke nature (“katniss,” for example, is the name of a real, edible plant) or have English or Greek roots—anything but Rome.

In “The Hunger Games,” the people are kept in line by hunger and entertainment. The privileged folks in the Capitol get both “bread and circuses”—the phrase comes from the Roman satirist Juvenal. The Latin is “panem et circenses,” and Panem is the name that Ms. Collins purposefully gives the country where her story is set.

The most important entertainers are the participants in the hunger games, a fight to the death, reminiscent of the gladiatorial games of ancient Rome, whose influence Ms. Collins also cites. The games begin with the very Roman ritual of participants entering a stadium on chariots to the wild applause of the crowd. Like ancient gladiators, the participants are doomed but idolized.

Much as in the myth of Theseus, the participants in the hunger games are offered as tribute to the Capitol, one young man and one young woman from each district of the country. For the lone survivor, the games are a rite of passage. All ancient societies made young people go through such rites. In Athens, new warriors had to survive in the woods, and there is an echo of this in the hunger games, which are set in a jungle.

Myths work because their themes are of abiding interest, and “The Hunger Games” is no exception. We still have rites of passage for young people today. If ours tend to test mental rather than physical stamina (college entrance exams are more common than boot camps), they remain daunting and demanding in their own way—which perhaps explains why the life-or-death stakes of “The Hunger Games” strike such a deep chord among our decidedly nonclassical teens.