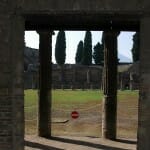 In spring 196 B.C. the Roman proconsul Flamininus gave a speech. The scene was the Isthmian Games, near Corinth. Rome was the new master of Greece, after having smashed the Macedonian army the year before. The Greeks were used to being pushed around by great powers like Macedon. From Rome, they expected more of the same.

So they were thunderstruck at Flamininus’s words (which he had a herald proclaim). Greece, he said, was free. The applause was so loud that frightened birds are supposed to have fallen dead from the sky.

Poor Greeks. They thought that when Flamininus proclaimed Greek freedom, he meant it. Actually, Flamininus meant that the Greeks were free to obey Rome. “Freedom,” to Flamininus, meant that each of the hundred-plus little Greek city-states was on its own. Neither Macedon nor any of the various Greek federal leagues could unite them. In other words, it was the old Roman policy of “divide and conquer.”

But the Greeks didn’t hear that. They fell for Flamininus’s charm and overlooked his ruthlessness. They insisted on actually trying to be free. Rome was not amused. Two wars and fifty years later, a Roman army had sacked Corinth, one of Greece’s greatest cities, and hauled the surviving leaders of Greece’s political elite into exile. Greece was now a Roman province, and a poor and neglected one at that.

About 2200 years later, the representative of another imperial power has gone east to give a speech. President Barack Obama’s address in Cairo, like Flamininus’s in Greece, received rave reviews. (That is, unless you are an Egyptian democrat, an advocate of the justice of America’s Iraq War, a skeptic about the willingness of the Palestinians to live in peace with Israel, or a worrier about the Iranian bomb.) But whether it will bring freedom – the president used the word or its variants seven times – and peace – he used the word or its variants twenty-eight times – is questionable.

American concessions will be interpreted as weakness. America will be tested in ways that are frightening and dangerous.

Honeyed words bring temporary relief but they sow the seeds for long-term conflict. Ask the audience at Isthmia.