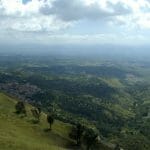 Spartacus has nothing to do with the Emerald Isle, but he wrote a chapter of Celtic history and he offers distant echoes of the saint’s life. Let’s take Patrick first.

Like Spartacus, Patrick was born free, fell into the hands of slave traders, and was shipped overseas into slavery. Like many of Spartacus’s followers, Patrick spent slavery as a shepherd. Like Spartacus, Patrick escaped from slavery. Patrick had divine visions just as Spartacus may have; certainly, Spartacus was the subject of others’ prophecy. Both men were great leaders and communicators. Both tried to reshape society, but there the similarity ends. Spartacus’s sphere was military, Patrick’s, spiritual.

To turn to Celtic history, note that Celts made up one of the three main ethnic groups in Spartacus’s army, alongside Germans and Thracians. Celts had come to Italy as slaves, either from Gaul or, as some think, from the Balkans, a Celtic stronghold in ancient times.

Celts dot the narrative of Spartacus’s war. Spartacus’s two lieutenants, for example, had Celtic names: Crixus and Oenomaus. Then there was the slaves’ habit of shouting insults at the Romans from the rebel camp: pre-battle taunts were a Celtic custom. Two Celtic women, to take another case, left the rebels’ camp early one morning to go up a hillside and practice monthly religious rites. To their surprise they found Crassus’s men setting an ambush for the insurgents. They hurried back to sound the alarm, which was courageous and plucky if, in the end, too late.

What better day than March 17 to remember these two unnamed Celtic heroines?