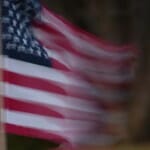 Driving downtown on Route 13 Tuesday night I saw an unaccustomed sight: the American flag everywhere. It was draped over the railing of the overpasses, which were filling up with people holding small flags. Flag-wavers gathered on the road beside the high school as I walked by. When I turned onto Green Street downtown, the road appeared to be blocked by a giant American flag hanging from a crane. As I got closer the flashing lights of police cars came into view, making it clear that the road really was blocked, so I turned onto a side street.

In Ithaca, NY, a town by turns hyper-sophisticated or crunchy-granola, overt displays of patriotism are not always welcome. In my son’s alternative school, for example, they rewrote the Pledge of Allegiance to make it less nationalistic – and gave students the option of not saying it at all. Then there was the day, not long after 9-11, when my daughter’s choir was giving an open-air concert downtown on the Commons. By chance, the United States began fighting in Afghanistan that day. The protestors were ready. As we watched our kids sing we were ringed by silent demonstrators carrying homemade signs with slogans like “Our Grief is No Excuse for Violence.” Ah, Ithaca.

Tuesday they held only flags. In a light, chilly rain, they stood waiting. The newspaper says that they lined the road here and there for sixty miles, all the way from Syracuse Airport. They were waiting for a hearse. It carried the flag-draped coffin of Corporal Christopher D. Bordoni, United States Marine Corps.

Chris Bordoni graduated Ithaca High with my daughter in 2008. He was probably one of the kids I saw marching up to the podium to get his diploma in the stifling heat of the gym on a June evening. He joined the Marines. He served two tours of duty in Afghanistan. In January, a month before he was due to come home, he was severely wounded. He died last week in a military hospital in San Antonio, Texas. Among the family he leaves behind is a widow. They were married last year. Like Corporal Bordoni, she is twenty-one years old.

Not everyone supports the cause he served, but few can fail to feel the pain of a young life lost. Fire fighters and police officers loomed large in the crowds on Tuesday – they know what it is to put your life on the line for others. To Corporal Christopher Bordoni’s family, we all express our sympathy and our gratitude.