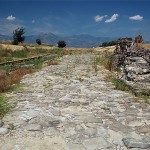 Their life was struggle; their lot was war. Did Spartacus and his followers ever feel the simple thrill of the open road? On an afternoon when things kept going wrong until I sat behind the wheel of a car on the highway, I couldn’t help but wonder.

It began in Boston’s Logan Airport, waiting for the shuttle to LaGuardia Airport in New York. I turned on my laptop, or tried to. Instead of a bright screen I got three high-pitched sounds. I tried again and again but nothing doing. Well, that’s what airplane books are for.

After starting a Dean Koontz novel on the flight to New York City, I was looking forward to finishing its high-wire chase on the connecting flight home. But the flight to Ithaca was canceled and there were no seats on any planes to nearby cities. I couldn’t imagine summoning up the energy to rent a car, white-knuckle it through New York City traffic and over the hills home.

No laptop. No book. No flight.

Throw away that airplane ticket! I drove across the George Washington Bridge and felt like a million dollars. I stopped for a tuna sandwich in a New Jersey diner and strolled back to the car. Old rock and roll played on a tinny radio as the sun set. It was Sunday night and the road was open.

A few hours later, the odyssey ended, as odysseys should, in Ithaca. It was a chilly spring night. The town’s cockeyed charm lay silent under a starry sky, with Orion’s belt all aglow. No legionaries lay in wait.