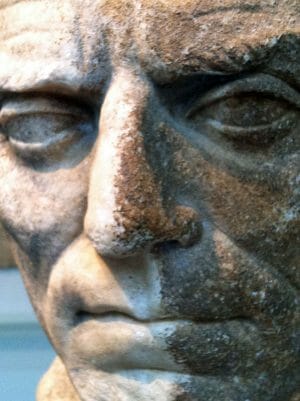 Obama, Israel, and the Ides of March

Obama, Israel and the Ides of March

It’s just as well that Israeli Prime Minister Benjamin Netanyahu managed to reach a coalition deal with his political rivals ahead of this weekend’s deadline. The tough world of Israeli politics has enough metaphorical daggers already without adding the shadow of the Ides of March. Still, as Prime Minister Benjamin Netanyahu finalizes a new governing coalition, he could do worse than remember the lesson of the Ides.

As Julius Caesar learned then, friends are potential enemies. Brutus, who led the conspiracy, had joined Caesar after initial opposition and risen to the top. His fellow conspirators included some of Caesar’s closest political allies.

Netanyahu would probably rather swallow daggers than form a coalition with his former Chief of Staff and recent rival, Naftali Bennett. Rather than trading charges of “Et tu, Bibi” and “Et tu, Bennett,” the two politicians should consider, following this week’s coalition deal, closing ranks for an even bigger event next week.

Next week, the Jewish state’s most important friend abroad, American President Barack Obama, is scheduled to arrive in Israel. Given their past history, Netanyahu and Obama might better be described as “frenemies,” allies who sometimes seem cordially to … well, not get along is the diplomatic way of putting it. Obama snubbed Netanyahu at the White House; Netanyahu rolled out the red carpet for the pre-election visit to Israel by Obama’s opponent, Gov. Mitt Romney. As a new president in 2009, Obama visited Cairo but not Jerusalem.

Obama’s trip to Israel during a new Netanyahu ministry offers something of a fresh start. Honesty can go far in bringing the two sides together. We love integrity even in an enemy, wrote Cicero, and how much more so in a friend. Still, there will be hard bargaining.

The Americans no doubt want to coordinate strategy with Israel in regard to Iran and its looming atomic bomb, but other issues will come up as well, among them Syria, Egypt and a Palestinian state. Will the two sides agree on a military plan to stop the Iranian bomb in the all-too likely event that a diplomatic solution fails? That seems improbable, given the American administration’s aversion to war. A compromise seems more likely, such as tolerating Iranian nuclear technology that stops short of actually testing a bomb. Of course, the Iranians will have to agree to that. So will the Israelis, who will have concerns about their own security and will expect guarantees and concessions.

Then there is the question of a Palestinian state. Assuming this remains high on Obama’s agenda, the president might press the prime minister to come up with a plan for Israeli withdrawal to the 1967 line, or something like it. If so, the questions then become: How hard will he press? What is to become of Jerusalem? How will the Israelis respond?

Each side might play hardball in the talks, but perhaps not as hard as the Romans did. Netanyahu, for example, is unlikely to brag about ties to anti-Obama politicians in Washington, as a German chieftain bragged to Caesar about his ties with his enemies in Rome. Obama, for his part, probably won’t imitate the Roman ambassador to Syria who demanded that the king withdraw his army from Egypt. When the king asked for time, the ambassador drew a circle around him in the sand and demanded a reply before the king stepped out. The king agreed and the ambassador, now full of warmth, shook his hand.

Obama — who’s scheduled to give a public address before Jerusalem’s International Convention Center — can draw a different kind of circle around Netanyahu by taking his case to the Israeli public.

One thing is certain: Whatever agreements the two sides reach might be considered binding but not permanent. Decisions made at the summit don’t last, as Caesar’s career demonstrates. In 56 B.C. he met with his coalition partners, Pompey and Crassus, to patch up the behind-the-scenes deal by which they ran Roman politics. Seven years later, Crassus was dead and Caesar and Pompey were fighting a civil war.

Let’s hope that American and Israeli relations are more solid than that. Still, it’s hard to gainsay an old saying about international relations: nations don’t have permanent friends or allies, they only have interests. Netanyahu and Obama will no doubt call each other “my good friend” when they meet later this month but what they will really be thinking is probably “what have you done for me lately?” Or, as the Romans put it bluntly: Cui bono? Who benefits?

Perhaps a modern Italian proverb puts it even better: Heaven help me with my friends — I can take care of my enemies myself.

Barry Strauss is professor of History and Classics at Cornell University.

Read the full text – Obama, Israel, and the Ides of March