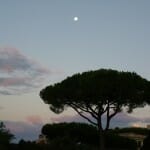 The past weighs heavily on us. That’s the message that I got during the first week of a sabbatical in southern Europe. Two incidents, one in Rome and the other outside Athens, showed this roving historian firsthand the real presence of neo-Fascism.