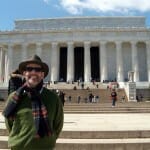 Standing in front of the Lincoln Memorial on a visit to Washington, D.C., I couldn’t help comparing the Rebel Gladiator and the Great Emancipator. The differences are legion, but one thing unites the two men: both freed slaves. In each case, emancipation was a means to an end. Spartacus aimed at hurting Rome, Lincoln, at weakening the Confederacy. But Lincoln sincerely hated slavery; we can only guess whether Spartacus felt an equal antipathy to the institution.

Still, if Spartacus was no perfect liberator, neither was Lincoln. He would gladly have tolerated slavery in the South as long as it didn’t expand to the territories. The Civil War forced him to take a more radical position.

Spartacus can hardly be credited with Lincoln’s eloquence, but he could certainly inspire. Both men shone in a crisis. Spartacus turned his enslavement into a war against Rome, while Lincoln turned Southern secession into a war first to save the Union and then to end slavery.

Lincoln was no gladiator but he certainly knew how to wrestle. He was a regional standout in his twenties. When it comes to political grappling, however, I suspect that the Thracian swordsman didn’t hold a candle to the Prairie Lawyer.