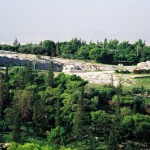 December 7 is a day that will live in infamy, but not only because of Pearl Harbor. Two thousand years before Japan’s surprise attack on the U.S. Pacific Fleet, another event in American history took place: the murder of Marcus Tullius Cicero. American history? Although Cicero was Roman, he had a unique influence on the minds of America’s Founders. We owe to Cicero the American ideal of a nation ruled by laws and not men.

Rome’s greatest orator, Cicero had a tongue like a silver switchblade. Or a sharp Sardinian jack-knife, with a handle carved in horn. When it came to speaking truth to power, Cicero lacked nothing in courage. In 43 B.C., power was a dictator, Mark Antony. No fan of cutting words, Antony made Cicero pay – with his life. He sent a pair of thugs to shut Cicero up for good.

God forbid that anyone should have to pay a price like that today for political courage. But I think of Cicero, now and then, at times of political oratory. I did this past week on the occasion of President Obama’s address at West Point.

Supporters of the Afghan War, it seems, fall into two schools when it comes to the President’s speech. One school sees a con man; the other, a statesman. Both schools agree that Obama had to steer between the nation’s interests and his own anti-war political base. One school says that it took guts and vision to commit 30,000 troops to an Afghan surge, while the other sees political flimflam in the promise to start withdrawing those troops 18 months later (you can’t fight wars on a timetable).

Me, I’ll give the President the benefit of the doubt. Now it’s our soldiers’ turn: they’ll take his words to war and even to victory. No matter what he promises now, no President will pull his troops out in 18 months if they are winning.

Yet I have to confess that I didn’t listen to Obama’s speech last Tuesday. Honestly, I’m not planning to tune into his Nobel Prize acceptance speech in Oslo on Thursday either. Patriots should be proud of our President’s honor. Surely he’ll deliver his words beautifully, as he always does.

But a politician’s words call for a buffer – a cooling-off period for hot rhetoric. An online transcript will do just fine for Obama’s remarks. Which leads to another anecdote from ancient history.

Lysias was one of Athens’ greatest orators. He specialized in writing speeches for the law courts. The story goes that he dashed off a whopper for one client, who read it with great excitement.

“Lysias,” the man said, “it’s a wonderful speech. We’ll dazzle the jury and win the case with ease.” Lysias took a bow and accepted his fee. The next day, however, the client came back with worry on his face. He had re-read Lysias’s words and seen through them.

“Relax,” Lysias answered. “The jury is only going to hear it once.”