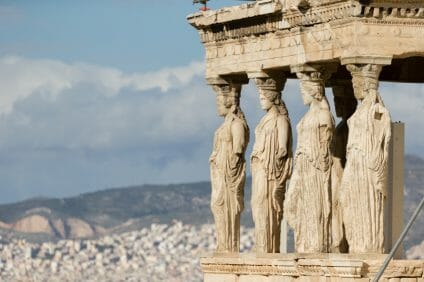 In my latest op-ed, published on May 22, 2016 in the Wall Street Journal, I talk about how insular politics can negatively impact trade and the economy, both through the lens of ancient Greek demagogues as well as the current state of affairs leading up the American Presidential Election later this year. Scroll down to read the full article.

Today’s presidential candidates are playing recklessly with free trade, alliances and immigration. They are pushing the misguided notion that high trade barriers will restore jobs and prosperity to the middle class, and scorning old alliances and new immigrants. These protectionist and nativist ideas aren’t new; they’re as old as the Greeks. Athens tried them but it created international disorder and the opposite of the desired result.

The story begins about 2,500 years ago with an alliance between Athens and the Greek city-states of the Aegean. Historians usually call it an empire, but it was more like a cross between the European Union and the Warsaw Pact. It was meant to protect Greece against Persia and it succeeded so well that it left some allies complaining it had turned into a protection racket in which they were bullied into playing along but got nothing in return. Athens didn’t allow allied exits and backed up its position with force.

Fortunately, the coup-makers didn’t stay in power long. An armed uprising, funded and manned partly by immigrants and slaves, defeated the usurpers and restored democracy to Athens. But the coup shows that even the most open society is vulnerable to nativist and anti-immigrant sentiment.

The biggest demagogue was the Athenian general Cleon, described by fellow general and historian Thucydides as “the most violent man in Athens.” Maybe, but Cleon was also a shrewd operator with a reputation for getting things done. He attacked elites, especially intellectuals, and the crowds cheered.

Although some of his initiatives fell flat—including the plan to execute everyone in Mytilene whether or not they had taken part in a rebellion against Athens—he remained popular and successful overall until he fell in battle with the Spartans (in Athens even demagogues died with their boots on).

Like Brussels in today’s EU, Athens became a supercapital. But it made the mistake of trampling on local rights. Athens mandated, for example, that major court cases be heard there rather than in the allies’ home city-states such as Lesbos, Naxos or Miletus. Athenians also threw their weight around abroad and bought up property that was supposed to be for locals only.