Hollywood and the Great Captains of Greece and Rome 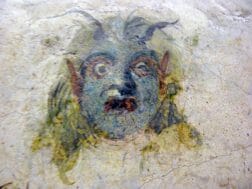 (In honor of Oscar week, my ancient ghosts have turned the blog over to an unnamed Hollywood critic.)

It is possible to make a great movie about the three greatest generals of the ancient world – Alexander, Hannibal, and Caesar – but you would hardly know it from Hollywood’s record.

With one exception, Hollywood has failed to rise to the challenge.

Most of its films on these 3 characters are clunkers like Alexander the Great (1956) – where not even Richard Burton’s rolling of his r’s can breathe life into the movie. Four years later came Hannibal (1960), a Spaghetti Eastern starring Victor Mature. This B-movie has a few big battle scenes and what’s billed as a “wall of elephants.” Forget about it. Until and unless Vin Diesel makes his rumored film “Hannibal The Conqueror,” see instead a great movie about a man who thought he was the reincarnation of Hannibal – Patton (1970).

In Cleopatra (1963), all eyes are on Elizabeth Taylor as Cleopatra and Richard Burton again, now as Mark Antony. Their scandalous, adulterous, real-life affair during production rocked a dolce-vita-era Rome during the making of this film. Rex Harrison may capture a bit of the real life Caesar’s urbanity in his droll performance, but who notices?

Much earlier, Caesar and Cleopatra (1946) had a script by George Bernard Shaw and moments when Claude Rains (Caesar) shines in the reflected glow of Vivien Leigh as a young Cleopatra. But none of this is enough to save the film.

The one great success is 1953’s Julius Caesar, which won numerous awards in Hollywood and abroad. To Shakespeare’s play, this film added West End actors (John Gielgud, James Mason), first-class direction by Joseph L. Mankiewicz and production by John Housman, and an electrifying Marlon Brando as Mark Antony. Then there were little touches of Hollywood’s great age such as the cinematography and music, to say nothing of performances by Greer Garson, Debra Kerr, Edmond O’Brien — and Louis Calhern hamming it up to Caesar. The movie is still riveting today.

But why did this film have no successor? There’s only one Shakespeare of course but surely the world deserved better than Oliver Stone’s Alexander – a mess redeemed only by the excellent Battle of Gaugamela and the scenes on either side of it.

The battle scene’s success may point to the heart of the problem. What makes Colin Farrell’s portrayal of Alexander work here and not elsewhere in the film is his charisma. In other scenes he looks like a bad boy in a blonde wig but in battle he is the god of war. Hollywood feels comfortable with a great general’s glamour on the battlefield but not in the forum. We are glad to follow a man on horseback when he leads the charge against the foe but afterwards, back home, in the give-and-take of political debate, we don’t want to bow to any man.

Hollywood, of course, is the product of democracy– indeed for better or worse, it represents democratic popular culture in essence. No wonder Hollywood feels uneasy with the status obsession of Caesar or the majesty of King Alexander or the conviction of Hannibal that he was on a divine mission. Much less can Hollywood accept the possibility that some few individuals are better than others.

A natural genius conquers the world by force of his personality? Hollywood is comfortable with such a figure only as a criminal from an exotic origin (as in The Godfather, 1972) or as a borderline nut job (as in Patton) or as a cartoonlike character (think, 2007’s 300).

Don’t get me wrong: I think that Hollywood’s blind spot is, on the whole, for the good. I’ll take one of Jimmy Stewart’s modest and self-effacing heroes over Caesar any day. One shudders to think what movies might result from a Hollywood that honored the “Leadership Principle.” But I do think we can do a better job of representing the role of greatness, products as we are of a society that preaches equality but reveres achievement.

Barry Strauss’s new book, <em>Masters of Command: Alexander, Hannibal, Caesar, and the Genius of Leadership</em>, will be published in May (Simon &amp; Schuster).