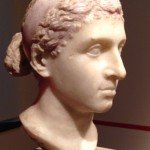 She was a strategic genius but she moved the world through love. She was the queen of Egypt in its decline, when Rome ruled the Mediterranean and was ready to snuff out its independence. Yet she almost brought down the Roman Empire. She had an indomitable will and an irresistible charm. As Pascal famously said, if her nose had been shorter it would have changed the whole face of the world.

Cleopatra seduced in succession two giants, among the most powerful men in Rome – Julius Caesar and Mark Antony – and bore their children. Her lover Caesar put her statue up in the Temple of Venus in Rome. Who knows? The sight of it might have driven Brutus and Cassius mad enough to stab Caesar to death on the Ides of March. Afterwards, Cleopatra found a new love in Antony. She aimed to rule an empire and she probably would have succeeded but she met her match in Augustus. His ships smashed her dreams at the Battle of Actium, 31 B.C. A year later, Augustus conquered Egypt. She and Antony each committed suicide.

She failed in the end but she left an unforgettable memory. If anyone doubts that love makes the world go round, only think of Cleopatra.