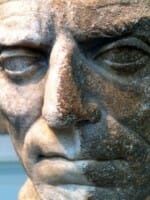 I read a report recently that Syrian ruler Bashar Assad sent thousands of soldiers into Damascus undercover, in black plainclothes, to make them look like policemen. Classicist that I am, I immediately thought of an incident in 49 BCE. Just before crossing the Rubicon and starting his invasion of Italy, Caesar sent centurions into the key city of Rimini (ancient Ariminum). They were dressed in civilian clothes, so as not to attract attention. Soon after, Caesar marched on the city with the small military force at his disposal. The centurions opened the gates and Rimini surrendered.

It occurred to me that Caesar has more than one lesson for today’s world. So I summoned up the spirit of bad old Julius and asked him what he thought about current events.

Me: Tell me, imperator, will Assad succeed in putting down the unrest in Syria?

Caesar: Not with soldiers in plainclothes he won’t. Assad has a real fight on his hands and will have to use massive military force against his enemies, just as I did to defeat Pompey and the Senate.

But Pompey and the Senate fielded soldiers. The Syrian rebels are civilians.

For now. We’ll see how long it takes the Syrian army to mutiny. Meanwhile, Assad will lose his authority if he keeps slaughtering civilians. In the age of Facebook, he won’t be able to control the narrative the way I did with my commentaries on the Gallic War.

If he’s not assassinated – beware the Kalends of May! — Gadaffi will survive. Unlike Caesar, Gadaffi is not about to disband his bodyguard. Without a massive injection of troops and money, NATO can’t defeat him.

It’s divided into more parts than Gaul. The Americans are trying to kill the enemy there with kindness. It won’t work. To conquer Gaul Caesar had to inflict massive casualties on the enemy. And he didn’t hesitate about pursuing them over the border into Germany. As long as the Taliban have a sanctuary in Pakistan, they will survive. Besides, the Romans stayed in Gaul for centuries, while the Americans are planning to leave Afghanistan by 2014. You can’t win a war on a timetable.

Iraq is a different story. Again, the Americans are making a mistake in withdrawing their troops too soon. But as messy as the situation in Iraq is, it has given the Arab world a taste for democracy. No Iraq, no Arab spring. Or maybe you think that Saddam Hussein would have let a thousand flowers bloom? Regime change is contagious, as we Romans know. Once we put our friends in power in one Italian city, the others started to turn our way.

But weren’t there just as many rebellions against Rome?

Maybe even more, in fact, but, as I said, we Romans never pulled our troops out. Imperialism was just too profitable to give it up. That’s America’s problem: nowadays, it makes more sense to be a captain of industry than a great captain. If he were alive, Caesar might have to trade in his eagle for an apple.

I was so shocked by this statement that I started to ask Caesar what he thinks of Donald Trump. I thought I heard something about Crassus when I lost my connection with the Underworld.