From Troy to Afghanistan 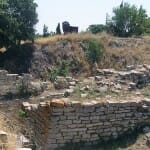 This week I revisited the Trojan War: I gave the John C. Rouman Classical Lecture at the University of New Hampshire. Although I’ve told that story before, it’s been a year or two, and I couldn’t help but feel how fresh it is. “The past is a foreign country,” as the saying goes – or is it? A long war, winnable only by unconventional means, speaks to our current condition. So does the world of Homer, a place where life is struggle and nothing good comes without pain. And somewhere, somehow, some shrewdie is building a wooden horse – and some shlmiel is going to buy it.

As for Troy, archaeology shows that it really existed, in what is now northwest Turkey. It was destroyed by a raging fire around 1200 B.C. Vast fortifications, arrowheads and spear points, an unburied skeleton, and the absence of most items of value: these all suggest that the city had been sacked. Was this the Trojan War? The ancient Greeks, who were the greatest skeptics who ever lived, believed that the Trojan War really took place. That is good enough for me.