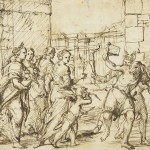 On February 15, 44 BC, priests ran half-naked through the streets of Rome and lightly touched girls and young women with goatskin thongs. The gesture, it was thought, would bring fertility. The occasion was the Lupercalia, an annual festival of purification.

In 44 BC a new group of priests took part in the festivities. They were called the Julian Priests, in honor of Gaius Julius Caesar, Rome’s Dictator for Life. The chief priest was Mark Antony, Caesar’s ally and co-consul. After running through Rome (see small photo), Antony finished in the Forum.

Caesar was there, splendid in triumphal robes. His seat was on the new Rostra or Speakers’ Platform that he had had erected. The large photo shows the ruins of Caesar’s Rostra. The arrow marks the stairs that led up to the narrow platform, which is now lined with the gray blocks of the cornice. Here the dictator waited and greeted Antony.

To the crowd’s shock, Antony offered to make Caesar King of Rome. A dictator for life was bad enough but a king was an abomination to most Romans. Caesar made a flamboyant show of refusing, but many thought he was protesting too much. They believed that Caesar really wanted to be king. They thought he cooked the whole thing up as a trial balloon.

It was a cynical conclusion but those were cynical times. Desperate times too. For some Romans, the events of 15 February were the last straw in the career of a man grown too powerful. They began to sharpen the daggers that they would use against Caesar one month later.

Afterwards, Caesar’s Rostra would showcase an entirely different event, rousing shades of passion poles apart from those of the Lupercalia.