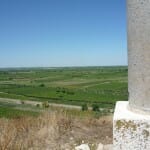 Some battlefields state their message plainly, like Gettysburg. Others cry out their pain, like Verdun. But most, I suspect, say absolutely nothing. They are just fields or groves or shopping malls, silent about their bloody past. Cannae is one of those. The site of the greatest battlefield of the ancient world, the place where Hannibal slaughtered 50,000 Romans in an afternoon, and thereby unintentionally inspired the plan that, 2000 years later, led to the disaster that was World War One, goes largely unmarked.

Yes, there is an archaeological site at Cannae, but it dates mainly to the Middle Ages, not ancient Rome. There is a museum too, but its artifacts conspicuously leave the battle out. There is a column erected to mark a view over the battlefield, but it isn’t nearly as engaging as the jaunty little train station tucked into the hillside where almost no one could ever find it. “Canne della Battaglia” — Cannae of the Battle – says the station of a little-used branch line, complete with plaques of elephants and helmets over the arcades. (In fact, there were no elephants at Cannae, but never mind.)

It would take the imagination of George C. Scott playing Patton to see Hannibal at Cannae. No soldiers line up here, just row after row of olive trees and grape vines – the latter, heavy with nearly ripe fruit at this time of year. Plaques and markers would help greatly, but the experts disagree about precisely where the great battle was fought. At Cannae, yes, but in what part? A tourist would vote for the valley that flows cinematically below Cannae’s hill, but the fight might well have unfolded on the wider plain to the northeast – out of sight and so, all but offstage. The course of the river that runs through the valley has changed since ancient times. The main crop then was different too – wheat, harvested in June, leaving room for fighting men and cavalry horses.

The only thing that hasn’t changed is the Mediterranean sky. It is still gray in the dawn hour when the soldiers began leaving their camps. It burns brilliantly at noon, when they were still fighting, and turns the sky red at sunset.