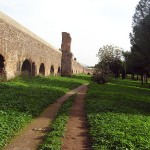 Certainly, he tried to protect civilians. On an autumn day in 73 B.C., his troops fell on a farming town in an upland valley of southern Italy. The Thracian ordered his followers not to burn down houses and not to rape, wound or kill civilians. They ignored him, though, and a massacre ensued.

An even more dramatic moment came when the rebels were penned in beyond Roman fortifications in the “toe” of the Italian “boot” in winter, 71 B.C. To remind his men what lay ahead if they lost, he crucified a Roman prisoner in the no-man’s land between his army and the enemy. This would not accord with the Geneva Convention, but neither would Rome’s treatment of runaway slaves: they were crucified. But slavery would hardly fit the Geneva Convention either.

Historical analogies help us to think about the issues of our own day. Applying modern standards to ancient history, however, is much more difficult. Spartacus engaged in torture, but some might consider that justified reprisal, especially given his attempts to protect civilians. The Romans were often far less scrupulous when it came to their treatment of innocent Thracians, Celts or Germans (among others).

Was Spartacus a tarnished hero or a man who sometimes rose above the tenor of his times?