Posted by Barry Strauss on September 5, 2012 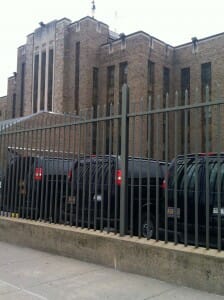 Yesterday I drove with a colleague through the lush Upstate New York countryside to the Auburn Correctional Facility. Better known as Auburn State Prison, it pioneered the notion of rehabilitating prisoners. It also pioneered the electric chair.

My colleague, Emeritus Professor Richard Polenberg, is teaching a course at the prison on constitutional law and criminal justice. Cornell University, along with others, offers college courses for prisoners at various upstate facilities. A few months ago, Professor Polenberg asked if I would be willing to give a guest lecture. I agreed.

To be honest, my motive was less humanitarianism than curiosity. How often would I have the chance to step inside a maximum-security penitentiary? Never – I hoped.

As we pulled up to the Stalinesque pile behind a wrought-iron gate, I could see what he meant. We had to go through security screening to get in, but it wasn’t much more than what is endured at any airport. It was only when the gates shut behind you – with an electrical whir rather than a clang – that you started to feel the difference. And then, more gates. And guards everywhere. I was glad to learn that there are college courses for the guards as well as for the prisoners.

Then came the yard and all the Hollywood clichés. As we walked through we saw massive walls, fences, basketball hoops, more iron to pump than anywhere this side of an NFL training facility, and a garden of sunflowers. No people, though: they were all in the mess hall.

Later on, I saw the yard full of people, and I thought all that one would. I felt the sad reality of violence in our society, the tragedy of race in America, the awfulness of crime and punishment. And I remembered humanity’s setbacks, in spite of many measures of progress since Caesar’s day.

We entered the school and shop building. It looked like a high school anywhere, except that the classrooms had glass walls, so the guards could see in. They also had “fight” switches, to flick if a fight broke out and help was needed.

“These guys aren’t in here for stealing a pack of gum,” a guard explained.

We got to the classroom and started to move the desks around. As we set up, the students filtered in from “chow.” They weren’t what I expected. What had I expected? The Defiant Ones? The Shawshank Redemption? The Bird Man of Alcatraz?

I guess I had expected a rough set of customers. That’s not what I got. The dozen students in the room looked, well, they looked ordinary. They looked like you and me.

That’s the point, buddy boy. There are 1600 prisoners in Auburn. They include hardcore criminals of the worst sort. They also include men who were in the wrong place at the wrong time, or who made a mistake, or who would have done better if they had had the advantages in life that some of the rest of us have.

Only 12 of the 1600 were taking this college class. I’d like to think that they belong to the second group.

I do know this: they asked questions that would give the best college students a run for their money. When it came to constitutional law, they grilled my colleague like a defense attorney on a roll. Heck, they grilled me on criminal procedure in ancient Greece and Rome like a graduate-school committee determined to put on the pressure at an “A” exam. In short, they were as highly motivated a group of students as I have taught.

Were they sincere or was it a con? I don’t know. I do know that they deserve a second chance.