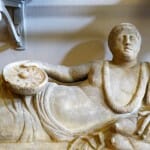 On March 14, 44 B.C., the day before the Ides of March, Caesar went to the dinner party from hell. The scene was the Roman house of his friend Marcus Aemilius Lepidus. Caesar brought with him another friend, Decimus Junius Brutus Albinus. Lepidus was a glorified errand boy for the dictator but he was a loyalist and Caesar had rewarded him lavishly. Decimus was more talented but more dangerous and Caesar kept him on a tighter leash but not tight enough. Unbeknownst to Caesar, Decimus was planning to assassinate him the next day.

There were probably other guests. Roman dining rooms were small but they could seat nine, reclining on couches. Lepidus would not want to dishonor Caesar with a small turnout, so we would expect a full complement. But Lepidus, Caesar and Decimus were the heart of the matter – a triangle of stalwart, traitor and victim.

A Roman dinner party ended with a drinking session and a conversation. Caesar himself proposed the evening’s topic: the best sort of death. As far as he was concerned, he said, a sudden and unexpected end was best.

At least one guest, the faithless Decimus, knew that Caesar would soon have his wish, so it is tempting to write the conversation off as fiction. Maybe so, but “a good death” was a favorite topic of highbrow chat in Greece and Rome. It is reported that on another occasion too Caesar said he wanted to die quickly and suddenly.

Certainly, the topic fits Caesar’s personality. He was a warrior who had spent most of the previous fifteen years planning or waging war. In less than a week he was scheduled to leave on a new military campaign expected to last three years. Death was his companion.

Not that Caesar wanted it any other way. For him, courage was a blessing and a curse. He loved high-risk, high-payoff strategies and going about Rome without a bodyguard was one of them. On the one hand, he won political points by making himself accessible but, on the other hand, he opened himself to assassination. So be it, Caesar thought, with a combination of fatalism and arrogance. Who, he asked, would be so crazy as to kill the one man who kept the peace in Rome? But foolish things happen when dictators deprive men of their honor. A warrior like Caesar should have remembered that.

So it’s entirely credible that Caesar would engage in a conversation about death on the eve of the Ides of March. The question is, how did Decimus, the assassin-to-be, keep a straight face?