Today is publication day for Masters of Command. I’m asking each of the book’s three masters for the lessons of his leadership. Yesterday I interviewed the ghost of Hannibal and Sunday I spoke to the shade of Alexander the Great. Today I speak to Caesar’s Ghost. 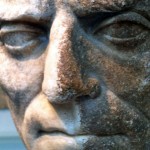 Hail, Caesar. What makes you a greater leader than Alexander or Hannibal?

“Hail, Professor. Congratulations on your new book. With Caesar in the title it cannot fail.”

“I can tell that you are busy today, so let me get right to the point – with audacity and speed. Caesar is Caesar, after all.

“All wars are won by two things – arms and words. Words alone are weak but arms without words are found wanting. With the right words behind them, arms fly into battle – and to victory.

“As one of my later admirers put it, ‘in war the moral is to the material as three to one.’”

That was Napoleon, right?

“A would-be Caesar. But if you want to win wars, here is all you need to know:

“VENI VIDI VICI. ‘I came, I saw, I conquered.’ Alexander and Hannibal each earned a long roll of achievements. Only Caesar can be summed up in three words.”