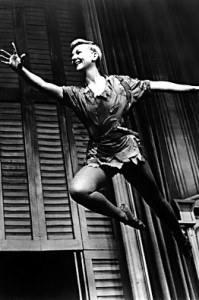 NBC’s upcoming live broadcast of the musical “Peter Pan” on Dec. 4 is making me smile. The same network’s videotaped replays of the Broadway musical with stage stars Mary Martin and Cyril Ritchard served up baby boomer candy in the 1960s, with the album, played over and over with the enthusiasm of a kid on a trampoline, making it even sweeter (my poor parents).

Mary Martin’s tomboy Peter was tantalizing but, in its gender-bending casting, not original. In fact, women played Peter from the opening of J.M. Barrie’s play in London in 1904. That makes sense because Peter Pan is a paradox.

The name “Peter Pan” is a blend, half-Christian and half-pagan. Saint Peter was an apostle and martyr. Pan was the Greek god of woods and mountains. Peter built the Church. Pan played the pipes, indulged in lechery and sowed panic. Barrie’s character is more Peter than Pan – untamed but upright.

But Peter Pan isn’t what he used to be. Books and movies have exposed the pain in Barrie’s personal life. Pop psychology turned the Jungian notion of the eternal boy into “the Peter Pan syndrome” of the adult who won’t grow up. Michael Jackson’s “Neverland Ranch” first glorified the ideal of a happy childhood and then besmirched it amid the tale of Jackson’s own abuse as a child and multiple accusations that he himself was an abuser.

But Barrie never preached eternal adolescence. The children in his play, after all, come back home. They leave Neverland and grow up. Peter Pan can’t keep them.

If Barrie adored childhood he came down on the side of adult responsibility. This is never clearer than in the revealing clunker of a play he wrote about a dozen years after “Peter Pan,” “Dear Brutus” (1917). The drama lets a group of regretful adults escape into a magical wood and have a second chance at marriage and career, but they end up struggling with the same character flaws that tripped them up in the first place. Self-improvement begins at home, they learn, and not in Neverland.

“Shakespeare knew what he was talking about—,” says one character, “‘The fault, dear Brutus, is not in our stars, but in ourselves, that we are underlings.’”

“For ‘dear Brutus’ we are to read ‘dear audience’ I suppose?” says another.

“You have it” is the reply.

The lesson is heavy-handed but the reference is expert. In Shakespeare’s “Julius Caesar,” Cassius speaks these lines to goad Brutus into joining the plot to kill Caesar, Rome’s dictator. This turns out to be a bad idea, to put it mildly. Rapid and reckless, it leads to a slapdash act that succeeds in killing not only Caesar but also the republic that the assassins meant to save.

The great orator Cicero admired the assassins but labeled their deed childish because they hadn’t thought through their next move. Cicero said this in real life, not the play – Shakespeare’s play is loosely based on fact – but it fits Shakespeare’s drama. There is something adolescent about the way Shakespeare’s Brutus and his friends gang up on the elderly Caesar only to get sucker-punched by their rival, Mark Antony. The victorious Antony calls Brutus “the noblest Roman of them all,” which is a polite term for “loser.”

Barrie is not the only author to admire Shakespeare’s line to dear Brutus. It appears again in the title of John Green’s “The Fault in Our Stars,” a bestselling 2012 young adult novel, and now a movie, about teenage love amidst cancer. Wry, wise and full of tears, the book reminds us that adolescence is something like a row of steel tire shredders that keeps us from ever heading back into childhood.

So don’t blame Peter Pan. In fact, he deserves to take a bow for giving us a longing look backward and then sending us on our way.

Oh, and by the way, I still love Mary Martin but when it comes to the musical Peter Pan’s hit song, “I Won’t Grow Up,” I prefer Rickie Lee Jones’s 1991 version. It’s jazzy, worldly wise and, well, grown-up.