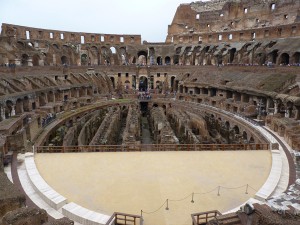 Happy Birthday, Rome! The ancients celebrated Rome’s birthday on April 21. They calculated that the city was founded in 753 BC, that is, 2,768 years ago, a date that archaeology suggests was roughly correct. But April 21 is more than just an antiquarian anniversary. It’s the birthday of Western Civilization.

It’s true that the West began in Greece with its imperishable culture. Yet it was Rome that spread the seeds of Greek thought and provided what it took for it to survive—first, power, and then, faith. Today London is a center of international trade, Frankfurt the financial capital of Europe’s largest economy. Brussels has the headquarters of both the European Union and of NATO. Yet none packs Rome’s symbolic punch.

As a military alliance, NATO has been searching for a mission since the collapse of the Soviet Union. Many doubt that NATO would defend the Baltic states—Estonia, Latvia, and Lithuania—if Russia gave armed support to “local” independence movements there, as it has in Ukraine, which is a friend of NATO though not a member. The alliance’s future hangs in the balance.

As for the EU, it has 28 member states, 500 million citizens, and, for most of its members, a common currency. But no one would die for the EU. The EU might aspire to nationhood but for now, it is a very loose confederation with a currency union.

You might vaguely remember April 21 from some high school history or Latin class, but you probably don’t know that May 9 is Europe Day. On that day in 1950, French foreign minister Robert Schuman proposed combining French and West German coal and steel industries. Just like our Declaration of Independence, right? Don’t hold your breath for the brass bands in commemoration. Europe Day doesn’t draw many crowds. But how could it, when some Europeans prefer to celebrate it on May 5, when the Council of Europe was established in 1949, while others might confuse it with the European Day of Languages, September 26. And then there’s its bigger neighbor, May Day—May 1, a holiday in much of Europe as both a traditional spring festival and the European equivalent of Labor Day.

Which brings us back to Rome. Almost 3,000 years after it was founded, Rome still symbolizes the soul of the West. The Holy Roman Empire is long gone but ever since Charlemagne was crowned emperor in Rome in AD 800, it has symbolized the idea of Western unity. Not for nothing was the European Economic Community, the EU’s predecessor, established in 1957 by the Treaty of Rome.

With its ancient monuments Rome stands for Western grandeur. Lord Byron knew what he was doing when he said of Rome:

The most important symbol of Rome is religion. The Catholic Church, with 1.2 billion members worldwide, making it the largest Christian denomination, has its seat in Rome. And Christianity is by far the main Western religion.

The Islamic State militants of ISIS paid a backhanded compliment to that fact. In February they announced plans to conquer Rome. This may seem ridiculous, but so did the idea of a new caliphate conquering Mosul, or Iran getting the bomb or Russia lopping off parts of Ukraine. The threat to Rome displays a sure grip of public relations on ISIS’s part, as in their powerful, videotaped beheadings. A successful attack on EU or NATO headquarters in Brussels would shock the world with the glass and steel debris. But blowing up the marble of the Vatican and ISIS would put the will of the West on trial.

How would the West respond? Would we pass the test? On the birthday of our civilization, the answer is unclear.