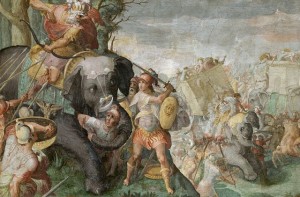 Hannibal of Carthage (in modern Tunisia) was one of history’s greatest generals. He invaded Italy in the third century BC and nearly brought Rome to its knees. At Cannae in southern Italy in 216 BC Hannibal won one of the most crushing victories in all of military history—and it is only the most famous of his battlefield successes. Yet, lecture on Hannibal, as I did recently, and you learn that what captures most people’s imagination about the man is his elephants. Cannae Shmannae! People focus on the 37 pachyderms that Hannibal took over the Alps when he crossed into Italy from today’s France in 218 BC. Never mind that, with the exception of one battle, they had little military significance—no elephants at Cannae. Their role was psychological: the great beasts impressed and terrified people. Hannibal knew it. He had a “media strategy” and he put the image of a war elephant on his coins.

Hannibal’s elephants come to mind when considering public reaction to military events in today’s world. When, for example, ISIS conquered a swathe of territory in Syria and Iraq larger than some countries, the public, at least the American public, paid little attention. But when ISIS beheaded a small number of American and other Western hostages, and released videos broadcasting the atrocity to the world, the American public was up in arms. It pressured the White House to intervene militarily, if only through a limited air campaign. In real terms the conquest of Mosul and Fallujah mattered much more, but what grabbed the public’s attention was the videotaped beheadings on YouTube—like Hannibal’s elephants they focused the mind.

One could object that the real issue was nationalism, and that Americans paid attention to the videos only because Americans were the victims. But a different dynamic is at work when it comes to public attitudes toward Iranian military power. Iran has of late expanded its military power massively in the Middle East, in Iraq, Syria, Lebanon, and Yemen, most recently increasing its potential strategic chokehold on maritime traffic in the Persian Gulf. Yet the American public pays little attention. It focuses instead on Iran’s quest for a nuclear bomb, even though no Americans have been murdered on videotape. To be sure, an Iranian nuke is no small matter, and would carry far more military weight than Hannibal’s elephants, but the subject looms much larger in the public’s mind than other indices of Iranian power. Like Hannibal’s elephants, it packs an outsized propaganda punch.

The real keys to Hannibal’s power were his warriors and crack cavalry, all full-time professionals who ran rings around Rome’s citizen-soldiers and its poorly integrated allied horsemen. The real stories of expansion by Iran and ISIS have to do less with videos or potential nuclear weapons than with the conquest of territory by soldiers. We need to keep our eyes on more than the elephants.