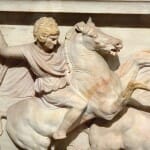 In the run-up to the publication of Masters of Command on Tuesday, I’ll ask each of the book’s three masters for the lessons of his leadership. Today I speak to the ghost of Alexander the Great.

Good morning, Your Majesty. What makes you a greater leader, O King, than Hannibal or Julius Caesar?

“I made many Alexanders. From Ptolemy and Pyrrhus to Pompey and Trajan. Hannibal and Julius Caesar were just two of those who followed me.”

So you were first, O King, but what makes you the best?

“No other conqueror had the nobility of heart to be sorry for his mistakes. The men knew that, and that is why they followed me.”

Forgive me, O King, but I thought they followed you because you made them rich and victorious.

“I was no mere manager, who won men’s support. They gave me something far more important – they gave me their hope. Judge my leadership by that.”

Speaking of management, what of the art of war, O King?

“Hannibal failed at sieges while Caesar had no cavalry to speak of. Only I mastered both, as well as infantry tactics.”

But didn’t Hannibal outdo you, Sire, at Cannae? He fought a perfect battle there.

“Maybe so, but I followed up my victories by sitting on Darius’s throne in Persepolis. Hannibal never had supper in Rome, did he?”

And didn’t Caesar’s reforms in Rome outdo the few changes you brought to the lands you conquered?

“I aimed higher. I married an Iranian woman and had my top officers do as well. Caesar couldn’t get the Romans to tolerate his liaison with Cleopatra.”

Hannibal dreamed of independent nations at peace under Carthaginian leadership. Caesar wanted a wider Roman ruling class under his rule. Weren’t both visions more practical than yours of universal kingship?

“Had I lived, I would have created an invincible empire from the Pillars of Heracles to the Ganges. Greek wisdom would have bloomed and grown for thousands of years, without the war and barbarism that have repeatedly beset it.