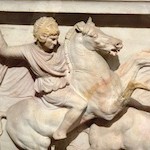 We fight wars with men – and with ghosts. When it comes to haunted battlefields, Afghanistan is second to none. The specters stretch backwards from the Soviets, who failed in Afghanistan in the 1970s, to the British who suffered there in the nineteenth century, and all the way to Alexander the Great, who conquered Afghanistan long ago but at a terrible cost. Fine books by Steven Pressfield and Frank Holt have recently examined Alexander’s Afghan War – a conflict, as some say, that was the original quagmire. And Alexander was one of the greatest generals in human history. Who are we to surge 30,000 more troops into the graveyard of the great?

Well, so the argument goes, but I beg to differ. Alexander’s history offers a much more positive lesson. In fact, it suggests that the U.S. and NATO can win in Afghanistan.

It would be pedantic to point out that most of Alexander’s “Afghan” campaign took place outside today’s Afghanistan; most of the fighting took place in the nearby states of what are today Tadjikistan and Uzbekistan. Nonetheless, the war spilled over into Afghanistan, which served Alexander as a base. And the war did not go well.

It was lengthy and exhausting. Alexander lost almost as many men in one bloody day as he had in the four years it took him to conquer all the lands between the Mediterranean Sea and eastern Iran. Alexander found himself driven to massacre civilians in the tens of thousands and to destroy their towns. Exposure to cold, wind, and snow raised his men’s casualty toll. Bandits and warlords proved challenging to an army used to fighting conventional warfare.

It took a toll on Alexander’s wonderful army, and to what end? Greek rulers survived for 150 years in Afghanistan, and Greek settlements lasted centuries more. For example, Kandahar – today a center of the American war effort – was once known by the magical name of Alexandria . . . Alexandria-in-Arachosia. But the Afghan war was not worth the price Alexander paid for it. He would have been better off staying in Iran and consolidating the huge empire that his army had already won, an empire that stretched from Egypt and Greece eastward.

Some things haven’t changed. Afghanistan still represents tough terrain for soldiers. It still is a paradise for brigands and bandits, but there the similarity ends.

Western soldiers today enjoy protection from the elements that Alexander’s Macedonians could hardly have imagined. The ancients had no thermal polypropylene and no snow tires.

More important, the kind of war that the surge in Afghanistan represents could not be more different than the war that Alexander fought in the region. The surge aims to protect civilians, not kill them. Allied plans aim at defeating warlords through policing, reconstruction, and diplomacy, not by wiping out cities.

Most important of all, the Afghan War is sound strategy. It demonstrates our determination that once a country is liberated from Islamist tyranny, it will stay liberated. (The sins of Karzai’s government cannot compare with those of the Taliban.) It guards the flank of Pakistan, a country with a strategic location, the world’s third largest Muslim population (175 million, of whom 95 per cent are Muslim), and, last but not least, nuclear weapons. Afghanistan was peripheral to Alexander but it is central to American interests.

Our soldiers in Afghanistan will suffer, unfortunately, as soldiers always do. They deserve our sympathy and support. General McChrystal’s counter-insurgency strategy has a real chance of succeeding. All it will take is the will to win. I hope the American government has that will. I know the American public does.