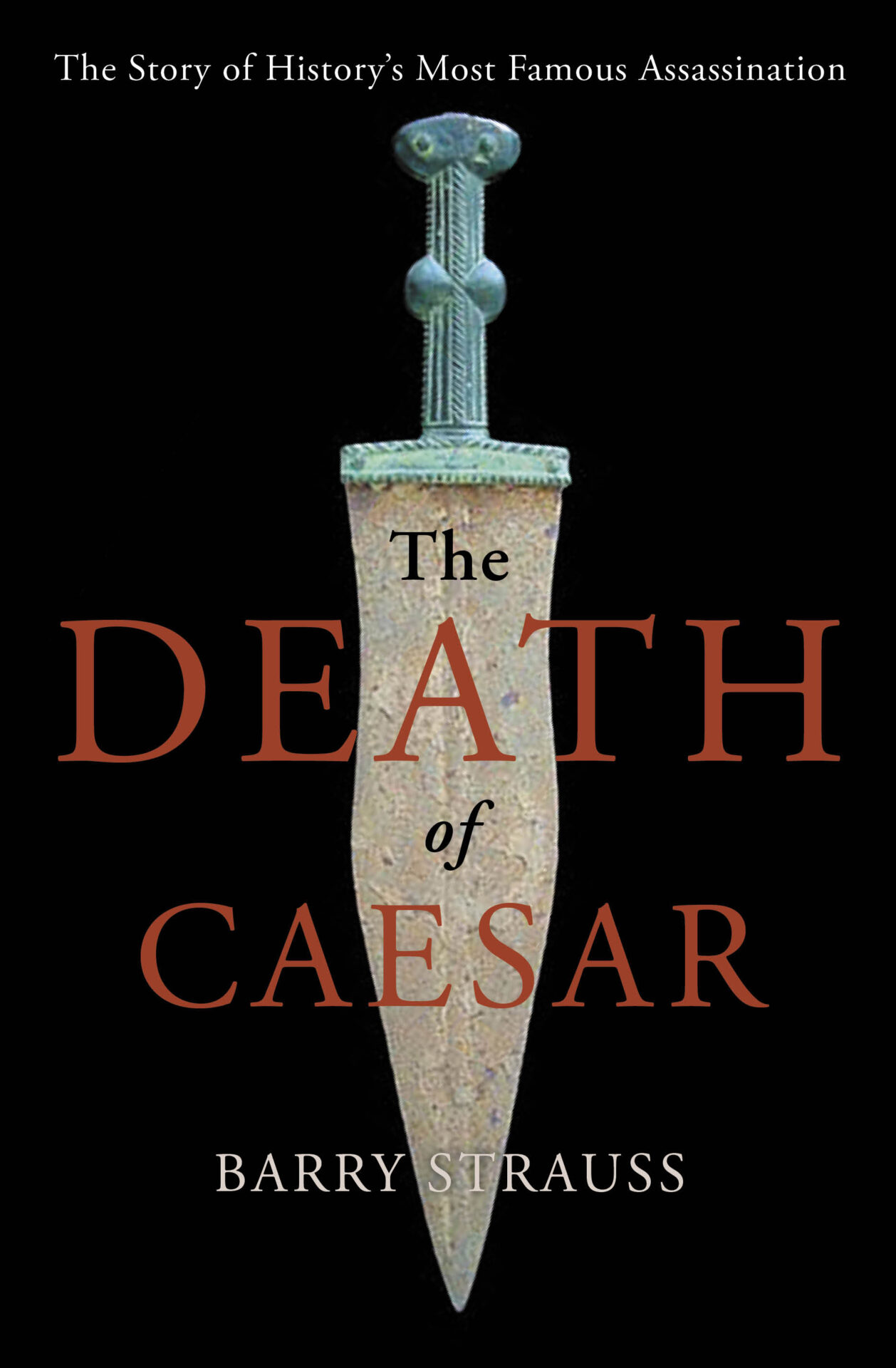 About The Death of Caesar

In Strauss’ The Death of Caesar, the true events of that fateful day come to light with a new analysis of the primary sources and the central characters surrounding the man and the legend that was Caesar. Moreover, this is hardly just a book about what happened on March 15, 44 BC; it goes into great detail about key events leading up to the Ides as well as those taking place during the bloody aftermath that followed.

The Death of Caesar is now available in bookstores and online!  Order your copy from Amazon.com here, or from Barnes & Noble here.

You can view a short video interview with Strauss where he explains in detail what the book is about and why it’s relevant to current events. Simon & Schuster has also published a brief video about the book as a part of their ‘History in Five’ series.

Extended Summary
The exciting, dramatic story of one of history’s most famous events—the death of Julius Caesar—now placed in full context of Rome’s civil wars by eminent historian Barry Strauss.

Thanks to William Shakespeare, the death of Julius Caesar is the most famous assassination in history. But what actually happened on March 15, 44 BC is even more gripping than Shakespeare’s play. In this thrilling new book, Barry Strauss tells the real story.

Shakespeare shows Caesar’s assassination to be an amateur and idealistic affair. The real killing, however, was a carefully planned paramilitary operation, a generals’ plot, put together by Caesar’s disaffected officers and designed with precision. There were even gladiators on hand to protect the assassins from vengeance by Caesar’s friends. Brutus and Cassius were indeed key players, as Shakespeare has it, but they had the help of a third man—Decimus. He was the mole in Caesar’s entourage, one of Caesar’s leading generals, and a lifelong friend. It was he, not Brutus, who truly betrayed Caesar.

Caesar’s assassins saw him as a military dictator who wanted to be king. He threatened a permanent change in the Roman way of life and in the power of senators. The assassins rallied support among the common people, but they underestimated Caesar’s soldiers, who flooded Rome. The assassins were vanquished; their beloved Republic became the Roman Empire.

Highlighted Book Reviews
“Strauss deploys his sources judiciously: he explains their biases and blind spots and when and how they disagree … Although he’s an academic, Strauss has, like Caesar, the common touch: he conveys the complexity of late republican Roman politics while keeping up a lively pace … He’s also a deft portraitist. Roman history can read like an endless parade of marble statues, but in The Death of Caesar, the players are all vibrant individuals, and none more so than Caesar himself.” (TIME Magazine, March 16, 2015 issue)

“The last bloody day of the Republic has never been painted so brilliantly.” (Greg Woolf, writer for The Wall Street Journal)

“Strauss’s account of the world’s most famous assassination is as thrilling as any novel.” (Robert Harris, best-selling author)

“Last Sunday was the Ides of March, the anniversary of the day when Julius Caesar was murdered in the Roman forum, 2059 years ago. This week’s book is a new history of that episode, “The Death of Caesar, the Story of History’s Most Famous Assassination.” The author, Barry Strauss, is the classics professor at Cornell and knows his stuff, but he presents the story in simple elusive prose. There’s too much set up. So, stay with it for the first 50 pages, and then it turns into a fascinating murder mystery with some nice twists and turns, and sheds light on one of history’s great tragedies, the fall of the Roman republic.” (Fareed Zakaria of CNN)

““…the American Barry Strauss provides a refreshingly different perspective on the death of Caesar. … That Strauss makes a passionately written story out of a dizzying set of sources is not the least achievement of his book.” (Berthold Seewald, writer for Die Welt)

“An excellent book…Although “The Death of Caesar” deals with events long past, today’s politicians might want to heed the warning: Beware breaking the rules and ignoring the public — not just on the ides of March but throughout the year.” (Christopher Harper, writer for the Washington Times)

“Strauss then goes on to give one of the most riveting hour-by-hour accounts of Caesar’s final day I have read, perfectly capturing those tantalising twists and turns of fate that continued up to the very last moments of Caesar’s life.” and “an absolutely marvellous read.” (Catherine Nixey, writer for The Times of London)

“The superb storytelling of Barry Strauss shows that the details of history’s most famous assassination are just as fascinating as why it happened.” (Scott Manning, The Philadelphia Inquirer)

“The Death of Caesar serves us both as an entertaining, vital act of preservation for those details and figures glossed over by other historians and as a reminder of a plot so daring it would be unthinkable today. Strauss blends small forensic details like these — the kind found in any good true-crime story — with dominant political themes to give us a fresh, accessible account of the archetypal assassination, 2,059 years ago last month, that shook the Roman world.” (Nick Owchar, Los Angeles Review of Books)

“In taking on the conspiracy to assassinate Julius Caesar, Strauss tells a story of near-mythic status…” (Simon Gatke, writer for Maclean’s)

“…He did not say anything about the “Ides of March,” just one difference of many between the version of Caesar’s assassination presented by William Shakespeare and the likely truth, according to Cornell University history professor Barry Strauss’ new book, “The Death of Caesar.” Strauss pored through ancient texts to determine the truest possible version of the events surrounding the assassination of the legendary leader….” (Larry Getlen, writer for the New York Post)

“Strauss takes us deep into the psyche of ancient history in an exciting, twisted tale.” (Kirkus Reviews (starred review))

“I always knew the plunging of those fatal daggers was an epochal moment in Western Civ, but I never knew why – until now. Barry Strauss is our all-knowing Vergil, escorting us across the dim landscape of history, enlightening us with precious insight.” (Steven Pressfield, bestselling author of GATES OF FIRE and THE LION’S GATE)

“I have never read so detailed an account of the world’s most famous assassination—how the plot was planned, the many personalities, the killing itself and the bitter aftermath. The Death of Caesar brings back all the suspense of an extraordinary story, as if we weren’t sure what was going to happen next. An unputdownable book.” (Anthony Everitt, author of CICERO)

“Strauss … delivers a stellar retelling of what he describes, in the subtitle of his book, as “history’s most famous assassination” (Uttaran Das Gupta, writer for The Business Standard)

Additional Book Reviews
“We get it all, stripped of Shakespearean representation: auguries, ceremonies, games, gladiators, forums, villas, class rivalries, Senate intrigues, turncoats, civil wars that resulted in Octavian, Caesar’s nephew and heir, becoming Augustus, the first emperor. Strauss has an eye for all of it in his decisive, clear prose, whether explaining Cleopatra’s powers, Caesar’s unbounded egotism, armies in battle or the high stakes all bled and died for….Tense, bristling with information and lively descriptions, this terrific history moves and reads like a thriller, even though we know it can only end in suicide and more massacres.” (Sam Coale, Providence Journal)

“Discover: An engaging character study of the men who sank daggers into one of the ancient world’s most powerful leaders.” (Starred review from Evan M. Anderson writing for Shelf Awareness)

“One of the book’s most interesting features is the way the author teases out which nuggets of information are most likely to be accurate…The thorough examination of various aspects of the assassination — timing, location, etc. — does not prevent the book from reading like a courtroom thriller at times.” (Editor’s Choice Book of the Week for April 3-10, 2015, BookBrowse)

“Strauss….brings a sometimes stomach-churning level of detail often missing from the version of events presented by William Shakespeare in his early 17th century play.” (Brian Burnes, The Kansas City Star)

“Strauss handles the actual action of the assassination with aplomb, even though it’s a familiar tale. But it’s the part of the story that sets up the assassination and the aftermath that mark THE DEATH OF CAESAR as an impressive and necessary work.” (Curtis Edmonds, writer for bookreporter.com)

“The Death of Caesar manages to be both meticulous and gripping, a noble book about a grim era.” (Tom Rogan, writer for The Washington Free Beacon)

“History and classics professor Barry Strauss offers both excellent historical detective work and riveting prose. Meticulously researched and superbly written, The Death of Caesar is a vivid and readable exploration of a momentous event.” (Roger Bishop, critic for BookPage)

“Thanks to Shakespeare, we all know whodunit—but what do we really know about the assassins, what they hoped to achieve, how the aftermath played out, and the interrupted agenda of the dictator who was murdered so famously on the Ides of March?  Barry Strauss meticulously examines the evidence, following all the story threads back to their primary sources.  His writing is clear and cogent.  The result is a genuine page-turner.” (Steven Saylor, author of Raiders of the Nile and The Seven Wonders)

“With keen historical insights and the pace of a thriller, Barry Strauss brings vividly to life the Rome of 44 B.C., the final days of Julius Caesar, and the men who killed him. This is history as it should be written—a deeply human story of all the men and women caught up in these famous events.” (Adrian Goldsworthy, author of Augustus: First Emperor of Rome)

“This stupendous book has all the pace and action of a top-quality thriller—murder, lust, betrayal and high politics—yet it’s all true, and comes from the pen of the world’s senior academic expert in the field. A lifetime’s study of the ancient sources has gone into Barry Strauss’s utterly gripping account of the day that the course of human history radically changed. Superbly researched, wittily written, but above all driven by a truly exciting narrative that never lets up, this is history-writing at its best. Our understanding of what happened on the Ides of March and its chaotic, bloody aftermath is forever changed, and this will be the standard work for decades to come.” (Andrew Roberts, author of NAPOLEON: A Life)

“Barry Strauss, as both sleuth and classicist, guides us through the why and how of the killing of Julius Caesar. A riveting blow-by-blow account by a masterful scholar and story-teller of a human drama that changed the course of Western history.” (Victor Davis Hanson, Senior Fellow, Hoover Institution, Stanford University and author of THE SAVIOR GENERALS and CARNAGE AND CULTURE) Barry StraussThe Death of Caesar02.02.2015
“No one presents the military history of the ancient world with greater insight and panache than Strauss….” - Publishers Weekly
Purchase Online
Amazon