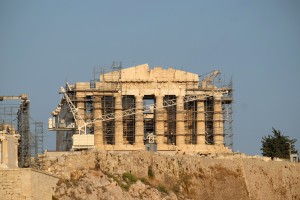 Five years after national bankruptcy shattered a recession-battered Greek economy, shook the euro to its foundations, led to violent riots in downtown Athens and spawned extremist political parties of both the right and left, Greece is calm.

The government has cut deficits, the stock market is doing well and tourism had a banner year this summer. Athens is less polluted than in the past, the Acropolis is lit up at night, and music and wine flow freely in the tavernas. The Athenians are as vivacious as ever, charming and outspoken.

Yet, with tourist season over, the restaurants are half-empty. Pollution is low in large part because people cut back on the use of their cars in order to save money. Talk about politics contains a certain amount of whistling in the dark about the extremists and the next election.

A center-right-led coalition governs for now, but the most popular party is the radical leftist Syriza and its charismatic leader. Meanwhile, on the far right, the leaders of the neo-Nazi Golden Dawn party are in jail and a prosecutor has ruled them members of a criminal organization who should all stand trial. But some worry that it will only make them more popular.

Overheard: A middle-aged Athenian talking loudly on his cellphone about the long list of medicines his doctor has ordered and the widely expected collapse of Greece’s coalition government next spring, as if both were conditions that had to be managed. One senses a certain national sense of resignation — and with good reason, because there is no easy way out.

As a nation, Greece has had a wild ride. The first decade of the euro brought a wave of cheap credit. Greece’s 2004 Olympic Games were not only a source of pride, but an occasion for massive investment in Athens’ infrastructure. Meanwhile, the government racked up massive and unsustainable deficits. When it was forced to admit it, a bailout was the only solution.

Greeks today refer to the dire state of the economy as the “Crisis,” without further explanation, the way New Yorkers once referred to the destruction of the Twin Towers and 3,000 deaths as the “Attacks.” The Crisis means austerity, the price that Europe and the International Monetary Fund (IMF) imposed for financial aid. Greece has suffered a sharp drop in wages, declines in both production and consumption, an increase in poverty, a general unemployment rate of 27 percent — with nearly 60 percent youth unemployment — a return to the countryside by people who had to give up the Greek dream of making it in Athens, and emigration by the young to northern Europe, the Americas and Australia. What few new jobs Greece has are often low-paying and the applicants are often hugely overqualified. In short, Greece remains in a depression.

Greece’s partners in the euro have offered too little help at too high a price, but Greece cannot leave the euro to go back to the drachma: The transition costs would be overwhelming and the drachma would be of little worth. Greece’s politicians have made some cuts in order to satisfy foreign creditors, but not many.

If things are improving, they are only improving slowly, and at a high human cost. Like the eurozone itself, Greece seems stuck.

The Greeks are no longer rioting; they seem resigned to the new normal. Whether the rest of Europe is, is another matter. With nationalist sentiment on rise, the goal of European integration is receding. The euro gives much of Europe a common currency, but it has not turned Europe into a federal state. If it had, the rich nations of northern Europe would not have constantly hesitated and waited until the eleventh hour before helping Greece and the other struggling countries of southern Europe. By the same token, Greek politicians appear unwilling to do more than the minimum needed to satisfy their creditors. While the private sector has shrunk, they have barely cut government jobs. Political patronage is a way of life, as is tax evasion. Powerful interest groups step in whenever the government attempts to liberalize the labor market, a change that is desperately needed but making little headway.

Although many Greeks say that their wealthier neighbors ought to absorb the burden of debt in the poor south, others add that they hope austerity lasts a little longer because it is the only thing that might force the country’s politicians to make reforms they would never do on their own. But will they indeed reform even now?

The one deficit that all of Europe seems to share is a deficit in leadership.