The Ides of March: A Leadership Epic Fail

Lessons from Julius Caesar about what not to do when running a company.

When it comes to leadership, history offers few more teachable moments than the Ides of March. On that day, March 15, 44 B.C., Julius Caesar was stabbed to death in Rome. It was an epic failure of leadership. After winning a civil war, Caesar became Rome’s dictator and had the chance to reshape the empire’s politics. Instead, he alienated friend and foe by his highhanded ways while dismissing his bodyguard in a foolish attempt to seem approachable. He was approached—with daggers.

One of history’s most successful conquerors, Caesar was an autocrat who was used to obedience and adoration. He was a narcissist with no interest in the dull details of persuading Rome’s old guard to join his new men in a unified team to govern an empire. From filling top offices via nepotism, to discouraging senior statesmen from offering advice, to sneering at the republic itself, Caesar made clear his disrespect for Rome’s veteran leaders. They responded by sabotage, resistance and, eventually, murder. 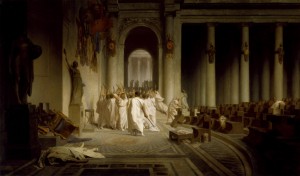 Call it the Caesar syndrome. A bold, talented, aggressive leader conquers an organization and then thinks the heavy lifting is over. But a leader’s work isn’t done when he becomes CEO—it has just begun. The goals: to listen, empower, collaborate and compromise, all for the good of the organization and not himself.

A leader listens. While communicating his own vision clearly he demonstrates respect for the organization and its traditions. He makes himself available and doesn’t keep people waiting. Caesar kept Cicero, the lion of the Senate, waiting for long hours before he was admitted to see the dictator. He knew that the grand old man of Rome’s establishment detested him as a result, yet preferred running the risk of alienating him to sacrificing the dignity—even the mystique—of his unique position as Rome’s first dictator-for-life.

But other Romans valued dignity too. Caesar might have respected that by taking a leaf from the book of Jim Sinegal, the co-founder and former CEO of Costco who took the firm to its No. 1 position in the industry. Mr. Sinegal spent more than half the work year visiting stores around the country, where he went out on the floor and talked to customers and employees. No long waits for them. It went along with Mr. Sinegal’s policy of giving generous employee benefits even if that made some shareholders grumble.

A new CEO builds on a company’s past strengths by keeping key people in place as he takes authority. He doesn’t replace them or give them empty titles, as Caesar did. A true leader can make the inherited management team feel valuable and find ways to make them productive and maintain their self-worth.

The counterexample to Caesar’s authoritarian style is Alan Mulally. When Mr. Mulally became CEO of the Ford Motor Co. in 2006, his assignment was to turn around an auto maker in decline. He had a record of success but in aeronautics, not automobiles, and he knew that he had a lot to learn. Although he had authority to fire the old management team, he kept most of them on, arguing that Ford’s problem wasn’t its people but its management system.

Mr. Mulally put a new system in place, but it rubbed the old team the wrong way. The manager who protested most boldly was the internal candidate for CEO who Mr. Mulally had beaten out, Mark Fields. But where some might have seen daggers, Mr. Mulally embraced Mr. Fields’ resistance and used it as an occasion to bring the leadership team together and make it more collaborative. The move worked, and brilliantly. Ford returned to profitability and was the only major U.S. auto maker to avoid a government bailout in 2008. As for Mr. Fields, not only did he succeed under Mr. Mulally, he followed him as Ford’s CEO when Mr. Mulally retired in 2014.

A successful leader builds a culture of cooperation, not a cult of personality. Take Amy Gutmann, president of the University of Pennsylvania since 2004, and a scholar of democracy. A visionary with a strong sense of how to get things done, she came to Penn with a plan to grow the endowment in order to be able to offer needy students more financial aid without burdening them with huge loans. She succeeded brilliantly, in large part by being a great listener with an ability to get people on board. “Nobody succeeds alone,” she has said, “I have always had great teams working with me.”

Caesar’s motto was “I came, I saw, I conquered.” It might be one of the pithiest marketing devices in history but it sent precisely the wrong message. “I’ll listen, I’ll learn, I’ll share” is what a real leader says. Combined with a genuine effort to respect and engage the inherited management team, that approach will leave a CEO popping celebratory corks instead of dodging daggers.